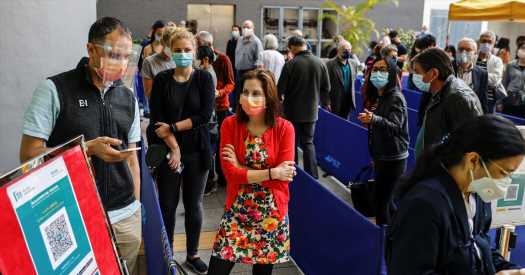 Hong Kong Halts Use of Pfizer-BioNTech Vaccine Over Packaging Defects

Hong Kong on Wednesday suspended use of the Pfizer-BioNTech vaccine after packaging defects ranging from cracked containers to loose caps were discovered in one batch of doses, in a major blow to a city already struggling in its campaign to inoculate its seven million residents against Covid-19.

Health officials called the halt a precaution, saying that none of the defective vials had been administered to patients and that they had found no health risks. But if the suspension persists, the Chinese territory may not have enough shots to protect its population while the coronavirus continues to spread. Hong Kong officials were counting on 7.5 million doses of the vaccine, developed by Pfizer of the United States and BioNTech of Germany, to help fill their needs.

The discovery has also unleashed a hunt for the origin of the defects, as well as questions about whether more might be out there. The doses were manufactured at BioNTech’s facilities in Germany, while a Chinese company called Fosun Pharma was in charge of transporting, storing and distributing the shots in Hong Kong.

“I’m confused as to why this is being reported for the first time in Hong Kong and we haven’t heard about it elsewhere,” said Benjamin Cowling, the division head of epidemiology and biostatistics at the University of Hong Kong.

“Was there anything special about this particular batch? Presumably they were manufactured in exactly the same way that the other batches have been manufactured in Germany.”

In a statement on Wednesday, BioNTech said the batch in question had been sent only to Hong Kong and Macau, another Chinese territory nearby. The company said it was investigating the source of the problem.

“At this point, we have no reason to believe there is any safety risk posed to the population,” BioNTech said.

Fosun Pharma said that BioNTech had detected problems with the lids within a batch of vaccines shipped to Hong Kong and Macau, where the authorities have also suspended administering the vaccine. Shares in Fosun Pharma fell 4.8 percent in Hong Kong trading on Wednesday. 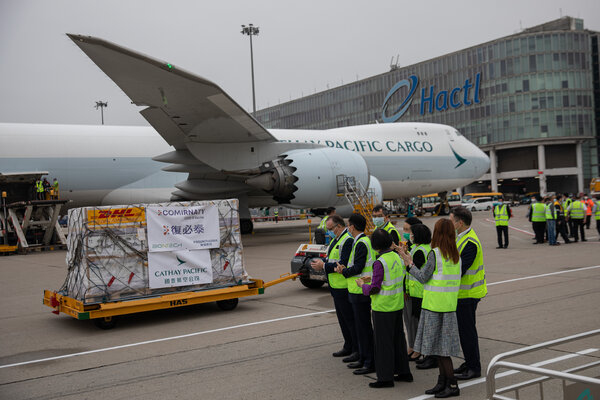 Already, Hong Kong’s inoculation drive has been plagued with public doubts. Vaccination bookings had fallen after reports that several people had died after receiving the other vaccine Hong Kong is using, which is made by Sinovac, a Beijing company. Residents scrambled to book appointments for the BioNTech vaccine, which had roughly double the number of bookings as Sinovac over the past six days, according to official data.

The Hong Kong government has found no direct link between the shots and the deaths. But some people don’t trust the government after mainland Chinese officials tightened their control over the former British colony following antigovernment protests in 2019.

In January, a poll of 2,733 residents showed that only 39 percent of Hong Kong residents were willing to take a Covid-19 vaccine.

“There are some important risks here that this will further undermine confidence in the vaccines that are available,” said Karen Grépin, an associate professor at the School of Public Health at the University of Hong Kong, who got the BioNTech shot on March 12.

Professor Grépin said that many Hong Kong residents had been waiting to see what the early stages of the rollout would look like before deciding on taking a vaccine.

The suspension sent a ripple of uncertainty through the city’s clinics and medical offices, as vaccinations shuddered to a halt.

Lindsay Eng, 36, got vaccinated at 9:11 a.m. on Wednesday. As she sat in the waiting area afterward, she noticed new people had stopped coming in. When she left the center, staffers were putting up a sign that said the vaccination service had been suspended. A crowd of people who were arriving for their vaccinations were asked questions.

Ms. Eng said she wasn’t particularly worried about her own health but was more concerned that the incident would result in fewer people in Hong Kong getting inoculated.

“Just talking to local people here, it’s pretty clear that there are a lot of people who are saying, ‘Let’s wait and see,’” said Ms. Eng, who is from Toronto but has elderly family members in Hong Kong who are hesitant to receive a vaccine.

Hong Kong officials had reached out to Fosun for answers after receiving reports from frontline workers and pharmacists about defective vials and packaging, Constance Chan, Hong Kong’s director of health, said in a news conference on Wednesday. The defects were found before the doses were administered, she said, adding that workers had been vigilantly inspecting containers and vials.

In all, the government received eight reports of cracked containers, 22 reports of leaks, 16 reports of loose caps and 11 reports of stains or marks on the outside of bottles, Dr. Chan said.

The flawed doses were among a batch of 585,000 doses, with the order number 210102, the Hong Kong government said earlier on Wednesday, citing data from a Hong Kong subsidiary of Fosun. So far, 150,200 people had received shots from that batch, according to the government.

The authorities said they were also putting on hold another batch of 758,000 doses of the BioNTech vaccine, with the order number 210104.

“This is a precautionary measure to continuously ensure vaccine safety,” the Hong Kong government said in a statement.

Fosun said it would work with BioNTech to conduct inspections of the manufacturing plant in Germany, according to Dr. Chan.

Compared with the United States and Britain, Hong Kong has been slow in starting its vaccination drive. Just over 5 percent of Hong Kong’s 7.5 million residents have been vaccinated. The city has reported more than 11,000 cases and 204 deaths since the pandemic began, but it just beat back a new outbreak that resulted in hundreds of people being rounded up for quarantine.

It is unclear how soon concerns about the Pfizer-BioNTech vaccine will be cleared up or how quickly Hong Kong can make up for the shortfall. The city has also ordered 7.5 million vaccine doses from the British-Swedish company AstraZeneca, which are set to arrive in the second quarter. The company has not yet applied for approval of its vaccine in Hong Kong.

However quickly the problem is resolved, confusion has been sown.

Ruby Callaghan Brown, 32, and her husband arrived at a vaccination center on the eastern side of Hong Kong Island at 7:45 a.m. on Wednesday, 15 minutes before it opened. A staff member shooed them away, saying all vaccinations had been stopped and that an announcement was coming.

Then they read online that the center had reopened, so they returned. They were about to submit their paperwork when they were told once again that vaccinations were suspended.

They waited 45 minutes before leaving. “I thought, ‘I’m just going to sit here until they change their mind,’” she said.