Deroy Murdock: 'Back-to-Normal' Biden, the guy voters thought they were getting, still AWOL after 2 months 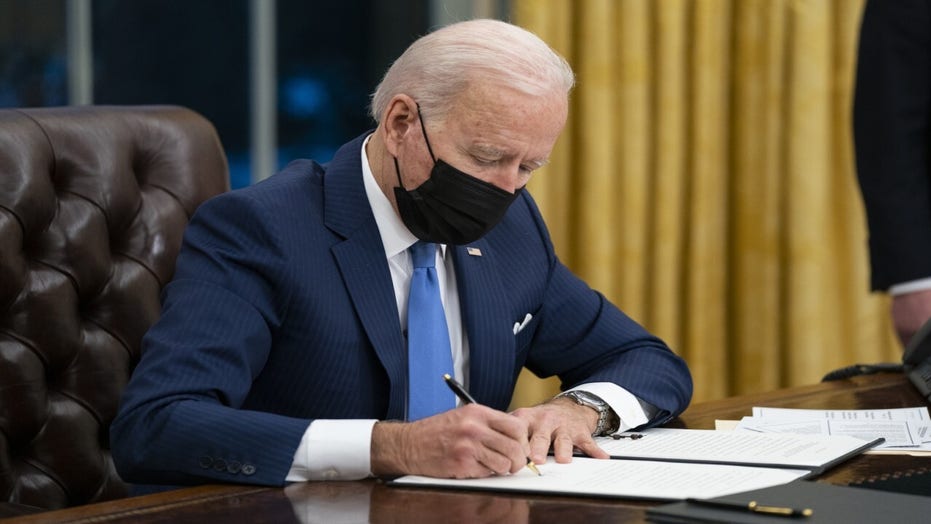 Sen. Cornyn on importance of the Biden administration visiting the border

Some 80 million ballots were cast for Joe Biden last fall, many because voters believed that he would bring America “back to normal” — such as it was before Donald J. Trump’s highly effective, albeit-tumultuous, presidency. Two months into the Biden Era, voters should feel betrayed. Nothing comes close to normal.

•Start with the catastrophe on the U.S.-Mexico border. Through words and deeds, Biden has created a man-made disaster area.

Journalist Savannah Guthrie instructed each of the 10 candidates on stage at NBC News’ June 27, 2019 Democratic primary debate: “Raise your hand if your healthcare plan would include coverage for undocumented immigrants.” As millions noticed between Tijuana and Tegucigalpa, up went Biden’s hand, and those of his nine rivals. “It’s the humane thing to do,” Biden explained. The Washington Post confirmed Biden’s cornucopianism on this question.

“We could afford to take in a heartbeat another two million people,” Biden told voters in Des Moines, Iowa, that August 8.

BIDEN REGULARLY CONSULTS WITH BARACK OBAMA ON A ‘RANGE OF ISSUES,’ PSAKI SAYS

Biden urged that “…we immediately surge to the border, all those people who are seeking asylum.” He told Univision’s Jorge Ramos at ABC News’ September 12, 2019, Democratic primary debate: “We are a nation that says, ‘If you want to flee, and you are fleeing oppression, you should come.’”

Biden promised on February 20, 2020: “Nobody is going to be deported in my first hundred days,” including violent criminals.

Biden also said he would “Increase the number of refugees we welcome into the country.”

Biden-Harris’ campaign website still pledges to “Reverse Trump’s public charge rule” and make America “open and welcoming to all, not just the wealthy.” This includes those who show up and then sign up for government assistance.

On Day One, Biden halted southern-border-wall construction and junked Trump’s Remain in Mexico policy. He soon scrapped Trump’s anti-caravan pacts with El Salvador, Guatemala, and Honduras. He then unveiled an eight-year path to citizenship for illegals.

Team Biden has capsized Team Trump’s transparency. It has gagged Border Patrol agents and sandbagged journalists who try to document the pandemonium in Biden-Harris’ child-clogged detention facilities or “reception centers,” as they might rebrand them. Why not call them concierge desks?

As for COVID, even at 2020’s pandemic nadir, Trump let journalists cover the border and nearby government facilities — whereupon they usually clobbered him.

“I respectfully ask US Customs and Border Protection to stop blocking media access to their border operations. I have photographed CBP under Bush, Obama and Trump but now – zero access is granted to media,” Getty Images photojournalist John Moore complained via Twitter on March 19. “There’s no modern precedent for a full physical ban on media access to CBP border operations.”

Moore stated the next day: “The photographs in this tweet string were taken with a telephoto lens from across the border in Mexico. Until now, US photojournalists haven’t needed to stand in another country to photograph what’s happening – in the United States.”

Perhaps most troubling, three Yemenis and a Serb on the FBI’s terrorist watch list have been nabbed at the border since October. How many others slipped through?

However, Defense Secretary Lloyd Austin overruled Hokanson and ordered these guardsmen to stay until May 23. Team Biden now owns this military occupation against nothing in particular.

“Prisoners do not pay taxes,” Cassidy said March 6 on the Senate floor. “Taxpayers pay for their every need. Inmates cannot stimulate the economy. But, under this bill they receive stimulus checks. This is a perfect example of nontargeted, inappropriate, and total waste of spending. It’s ridiculous that this is in the bill.”

•The White House announced that it would re-open America’s K-12 classrooms. Overpromising and underdelivering, their goal is merely to teach in person in at least half of schools for at least one day per week.

•Meanwhile, cancel culture grows like mold. Beloved toys and characters such as Mr. Potato Head, Dumbo, Pepe Le Pew, Peter Pan, and Speedy Gonzalez have been ostracized as — what else? — racist, sexist, and gender-binary.

This reinforced Dr. Seuss Enterprises’ discontinuation of six titles that previously had harmed no one. eBay then banned used copies of these volumes. This carbon-neutral book burning perfectly suits America’s neo-totalitarian Left.

•Biden launched a new Gender Policy Council. Previous presidents had recognized two genders — male and female — as the two versions of human genitalia confirm. Biden has junked this eons-old precedent. Perhaps he will embrace as many genders as does Facebook. Those 58 outnumber the playing cards in a deck and even Heinz’s 57 varieties of condiments. 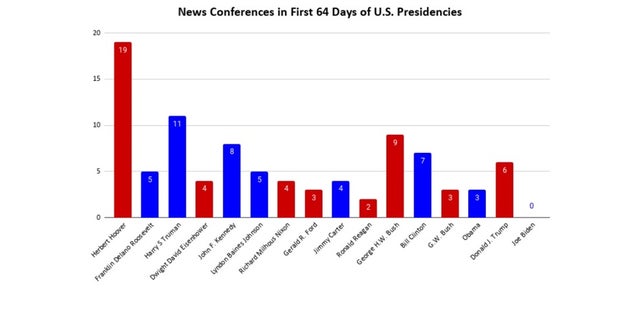 •New presidents usually have led press conferences by this point. Instead, Biden has held zero such events thus far. Biden plans a presser for March 28 — Day 64 of his presidency.

By their first March 20, these presidents had conducted multiple solo press conferences: Trump six, Obama two, G.W. Bush three, and Clinton six. In at least 92 years, through Herbert Hoover, no president has dodged a press conference as long as Biden has. His monumental stage fright pre-dates the Great Depression. 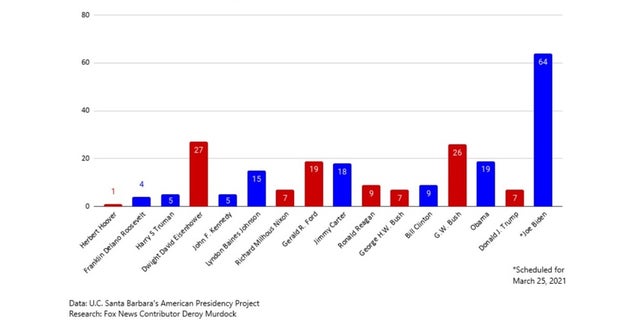 Whatever peace and quiet flow from not having Trump top-of-mind 24/7/365 is outweighed today by fears that Joe Biden is under house arrest, save for brief exercise every few days.

One might applaud these changes as triumphs of social justice or assail them as the hardest-Left broadside against the American Way ever. But nobody can call Biden’s first two months a return to normal.