IBC: The CURIOUS Case of Videocon

Valuers have found almost no assets to pay for their claims against the Videocon group that entered the insolvency process in 2018.
But the dissenters suggest that the money is elsewhere, possibly in the group’s oil and gas assets, which are not part of the group’s bankruptcy case.
Subhomoy Bhattacharjee reports.

It is extremely unusual for public sector financial institutions to break ranks and oppose each other as Bank of Maharashtra, Sidbi and IFCI have done in the Videocon group bankruptcy case.

But then, so many things about the group’s run-in with the regulators for some years are unusual.

It gets more complicated since some of those run-ins also involve the Vedanta group, whose entity Twin Star Technologies Limited has emerged the winner of the rescue plan.

In the bankruptcy case, the three financial institutions have dissented to the resolution plan approved by the National Company Law Tribunal (NCLT).

These institutions hold less than 4 per cent of the combined voting share in the plan, so they could not stop it from being adopted.

The leader among the lenders is SBI with 18.05 per cent.

Bank of Maharashtra has appealed to the appellate tribunal (NCLAT) that the total amount of Rs 2,779.05 crore (Rs 27.79 billion) provided in the resolution plan for all secured financial lenders, whittled down from the original claim of Rs 56,824.3 crore (Rs 568.24 billion), leaves it with, essentially, peanuts.

Sidbi, a small industries lending arm of the department of financial services, has dissented against its peers for the first time ever.

The three institutions informally argue that while 13 entities of the Videocon group figure in the resolution plan, almost all of them are now shell entities.

That is why valuers have found almost no assets in them to pay for their claims against the group that entered the insolvency process in 2018.

But the dissenters suggest that the money is elsewhere, possibly in the group’s oil and gas assets, which are not part of the group’s bankruptcy case.

The dissenters may have a point. Another government arm, the Enforcement Directorate, conducted searches at several places in Mumbai on the Videocon group.

The ED is probing a money laundering charge, which essentially means diversion of funds, against the group led by Venugopal Dhoot.

The case, which dates from 2012, concerns an alleged loan fraud by the group in the sale of an oil field in Mozambique, Africa.

The Mozambique case is most interesting.

An FIR filed by the Central Bureau of Investigation last year, before it transferred the case to the ED, stated that a consortium of banks, including SBI, IDBI Bank and ICICI Bank, had sanctioned a standby letter of credit facility (LoC) for refinance to Videocon Hydrocarbons Holding Ltd (VHHL), registered in the Cayman Islands, against the surety of the wells in Mozambique.

The investigating agencies have alleged that the banks did not get first charge on this account opened with a bank in London.

Whenever VHHL needed money, it dipped into this account without first meeting the obligations of these banks.

In other words, the banks extended a massive unsecured LoC of $2.7 billion to the Dhoot-owned company.

In fact, it was State-owned ONGC and Oil India that signed an agreement in 2013 with an international consortium to invest a 10 per cent stake in the Rovuma Area 1 Offshore block in Mozambique for $300 million.

But the oil ministry then could not find the money, so Videocon walked in as an investor.

When the wells went into production, Dhoot sold his stake at about $2.5 billion to ONGC and Oil India in 2014 — and asked them to repay the loan he held with the three banks, though the account into which their LoC had been paid had been drained.

This is the nub of the charges the ED is investigating.

To complete the cycle of controversy, the oil ministry has another running dispute with Videocon group, this time over an India-based oil and gas field, Ravva, off the Andhra coast.

This field, discovered by ONGC, was awarded to Videocon Petroleum as part of a joint venture in 1994.

The dispute stems from a production sharing contract (PSC) between Videocon and Cairn India on one side against the government for the years 2000 to 2007.

The government claims Videocon and Cairn were permitted, under the PSC, to recover less than $200 million from the field as the cost of its capital, whereas the company had recovered $499 million.

Vedanta acquired Cairn in 2011; if the insolvency award goes through, it could be in a position to acquire Videocon’s 25 per cent stake in Ravva.

The arbitration case, however, has gone in favour of the two private groups.

A tribunal in Malaysia had ruled in their favour in 2011, which the Indian government contested. 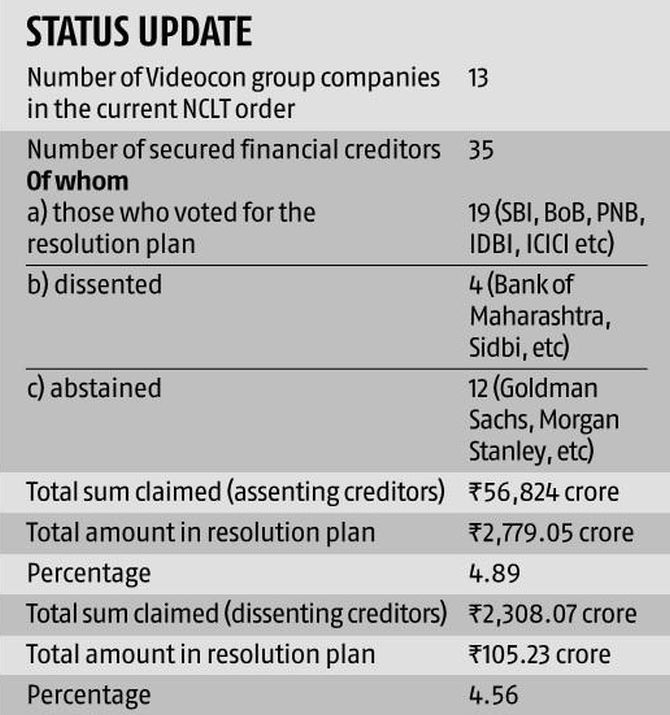 What is the connection with the Videocon bankruptcy award?

A top official from one of the dissenting financial institutions contends that the revenues from the Videocon group’s oil and gas assets should be part of the resolution plan (this includes, apart from Ravva, assets in Indonesia and Brazil).

In other words, the group has the wherewithal to settle its dues for a much higher amount than the IBC process.

Videocon had in 2019 opposed independent sale of these assets by lenders like SBI, claiming that the assets should be counted as part of the group.

But when the insolvency case came up before NCLT, these assets were missing.

Incidentally, while appealing against the resolution plan, Bank of Maharashtra has argued only against the distribution mechanism.

But the NCLT bench had clearly ordered that the concerns stated in the application before NCLAT by the dissenting financial institutions have already been taken care of in its own order.

The NCLT bench’s caveats are significant. The remarkably independent position taken by the relatively puny State-owned entities against their peers suggests that there is a lot more waiting to happen here.