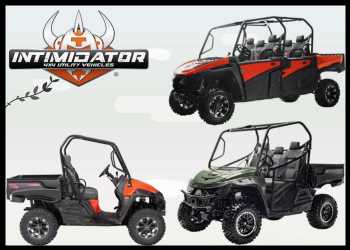 The recall involves Intimidator and Mahindra branded models 750, 800, 1000, TGB, and GC1K UTVs, which were sold in a variety of colors.

“Intimidator” or “Mahindra” is displayed on the front grill and the model series is printed on the rear-side panels. The serial range of the affected Mahindra vehicles are 000000 through 010545.

The vehicles were manufactured in the United States by Intimidator and sold at Intimidator and Mahindra authorized dealers nationwide from August 2013 through February 2022 for between $11,000 and $21,500.

According to the agency, the throttle cable can freeze at low ambient temperatures, resulting in a stuck throttle which can cause the brakes to fail to stop the vehicle, posing a crash hazard.

In addition, on certain Model Year 2022 Intimidator GC1K vehicles, the onboard software does not prevent consumers from exceeding 15 mph when the seatbelt is disengaged that could cause a crash.

The recall was initiated after Intimidator received 393 reports of throttle cables freezing, including four reports of crashes resulting in bruises. There were no incidents of excess speed when the seatbelt is disengaged.

Consumers are asked to immediately stop using the recalled utility vehicles and contact an Intimidator or Mahindra authorized dealer to schedule a free repair and to receive a software update/fix for the speed limiter.