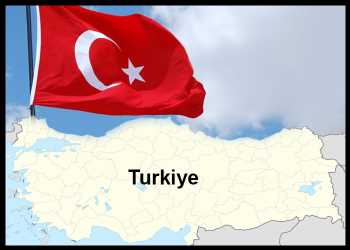 Turkey has officially changed its name to Türkiye. The United Nations accepted a request from the Turkish government on Wednesday to recognize the change.

In a letter to UN Secretary-General António Guterres, Turkey’s Foreign Minister Mevlut Cavusoglu wrote: “I would like to inform you that, in line with the Presidential Circular … dated December 2, 2021, on the use of the word ‘Türkiye’ in foreign languages and the subsequent branding strategy, the Government of the Republic of Turkiye, henceforth will start using ‘Türkiye’ to replace the words such as ‘Turkey,’ ‘Turkei’ and ‘Turquie’ that have been used in the past to refer to the ‘Republic of Turkiye.'”

The campaign to rebrand as Türkiye began in December, when President Recep Tayyip Erdogan said, “Türkiye is the best representation and expression of the Turkish people’s culture, civilization, and values”.

At the same time, Erdogan issued a circular calling for exports to be labeled “Made in Türkiye.” The circular also stated that in relation to other governmental communications “necessary sensitivity will be shown on the use of the phrase ‘Türkiye’ instead of phrases such as ‘Turkey,’ ‘Turkei,’ ‘Turquie,’ etc.

The reason given in the circular for preferring Türkiye was that it “represents and expresses the culture, civilization, and values of the Turkish nation in the best way”. According to Turkish state broadcaster TRT World, it was also to avoid a pejorative association with turkey, the bird, traditionally associated with Christmas, New Year or Thanksgiving.

As part of the re-branding, “Made in Türkiye” will reportedly feature on all products exported from the country.

Most Turks already know their country as Türkiye. However the anglicized form Turkey is widely used in global platforms.

Turkey is a transcontinental country located mainly on Anatolia in Western Asia, with a portion on the Balkans in Southeast Europe. It is officially known as a European country having membership in the European Union and NATO.