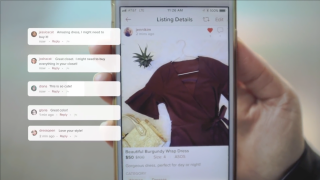 Poshmark managed to grow its social resale marketplace, beating analysts’ estimates as well as its own guidance for the quarter. But the business, impacted by changes to the iPhone platform, showed a steep decline in adjusted earnings.

Poshmark pulled in net revenues of $81.8 million over the second quarter ending in June, edging out expectations of $80.3 million as well as the company’s guidance, which ranged between $79 million and $81 million.

While the company’s numbers show continuing growth, it’s coming in at a slower pace. Revenue and GMV grew at 22 percent and 25 percent, respectively, over the same period last year. In the first quarter, the year-over-year increase showed 42 percent in revenue and 43 percent in GMV.

Meanwhile, Poshmark posted a loss per share of $0.04, or $2.9 million, versus 61 cents in the second quarter of last year, and adjusted earnings came in at $6.1 million with margins of 7.4 percent, a decrease compared to $23.7 million in the year-ago quarter.

Shares dropped 5.6 percent in after-hours trading on Tuesday on the news.

The numbers tell a complex tale, surely especially this quarter, as external issues from the broader tech sector influenced the platform — particularly on mobile.

“We were one of the first platforms in e-commerce to bet on mobile,” founder and chief executive officer Manish Chandra told WWD, explaining that the business started out as an iPhone app alone before eventually expanding into a website.

The Cape Makes A Return On The Runway

Still a mobile-first enterprise, it’s subject to changes enacted by smartphone platform providers, specifically Apple and its “IDFA” privacy updates. Earlier this year, the iPhone maker issued updates that hamper tracking by digital marketers by requiring them to get permission from users to gather data.

“During the second quarter, similar to others who use digital marketing, we began to see the impact of IDFA, which effectively increased the cost of mobile advertising due to less efficacy when running targeted marketing programs,” he explained. “Because our marketing mix is highly diversified and adaptable, we justify focusing on strong ROI user acquisition channels as well as investing [in] upper funnel strategies, such as TV and influence of partnerships to counter the effects of IDFA.”

The increase in marketing costs drove a decrease in profitability, Kashyap explained.

“We delivered adjusted EBITDA [earnings before interest, taxes, depreciation, and amortization], which excludes stock-based compensation, of $6.1 million, with adjusted EBITDA margins of 7.4 percent — up from 5.2 percent in Q1 — compared to $23.7 million and 35.4 percent margin in the second quarter of 2020,” he said, noting that the second comparison looks particularly hairy, since the company had lowered marketing spend during the first onset of COVID-19.

Of course, external tech partners and platforms can also benefit Poshmark. For instance, the company released its Poshmark Mini in July on Snapchat, extending the marketplace and its Posh Party shopping events to a new audience.

“One of the stats we can share is that 77 percent of the daily actives on that, on the Poshmark [Mini] are Gen Z. And so it just is another foray to engage with younger audiences, and audiences wherever they are emerging on the platform,” Chandra continued in his remarks to WWD. “They are driving, in many ways, the future of shopping, but also the future of resale.”

The resale narrative matters, as Poshmark’s marketplace of secondhand fashion allows the company to tap into a major theme for, especially, younger consumers.

Other areas that play into its growth strategy are its “inventory light” model — whose adaptability offers the sort of flexibility that can withstand pandemic-driven fluctuations, according to Chandra — as well as its focus on innovation and platform development. These include a growing array of video features and selling or shopping tools.

Poshmark recently rolled out Style Tags to personalize listings and enhance searchability and discovery, a pricing recommendation feature for sellers, buyer alerts and bulk listing actions so high-volume sellers can share or manage quantities of listings at once.

The company’s more literal expansion efforts are also crucial. On the category front, Poshmark launched Art & Design as sub-categories within the Home department, joining Pets and Beauty and Wellness, beyond the fashion category.

Geographically, it expanded its footprint with a launch in Australia earlier this year, and it’s preparing to launch in India by the end of the current quarter.

Toward that end, the company just hired two new executives, one to lead its entry into the India market and another to head Poshmark’s international growth across the board. Other internal shifts will see Kapil Agrawal, vice president of finance at Poshmark, take over for Kashyap as interim CFO, while the board welcomes new member Ebony Beckwith, chief philanthropy officer at Salesforce and CEO of its Salesforce Foundation.

While the global expansion can certainly deliver more active buyers to the platform, it also comes with some caveats, especially when it comes to the company’s advertising spend.

“If you look at some of the newer markets, there is going to be a bit more investment, ahead of revenue,” said Kashyap, who added that the company’s markets in Canada, where it has operated since 2019, and the U.S., where it launched, are obviously more mature. “[But] in Australia and India, the investment is a little bit healthier.”

How much healthier remains to be seen. Meanwhile, the next earnings report will cover the third quarter, which includes back-to-school sales that would normally be considered a key sales period under other circumstances. But there’s plenty of uncertainty this year, with the Delta-fueled resurgence in COVID-19 infections.

Chandra believes Poshmark can withstand it. “Demand is dynamic,” he said. “And that ultimately, is the true north by which we drive, and if the last 18 months have taught us anything, it’s to be adaptable and flexible, and continue to invest in that adaptability and flexibility.”