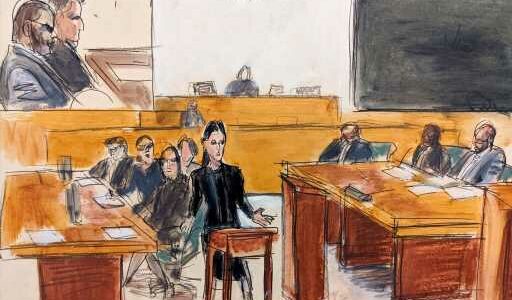 Attorney Gloria Allred, who represents some accusers, joined family members of Joycelyn Savage, who has claimed she was Kelly’s prisoner.

Kelly was acquitted of child pornography charges at a 2008 trial in Chicago. But he now faces a different situation, in that his music has been boycotted, his conduct scrutinized by journalists, and a spotlight on his activities was featured in a Lifetime documentary series, Surviving R. Kelly.

He has been in federal pretrial custody for the last two years and is facing pending cases in four different jurisdictions across the country.

Kelly’s lead attorney, Thomas Farinella, tweeted Tuesday night that “The public has only heard one side of the story,” adding that Kelly’s legal team would attack the case against him.

“After all, the RICO ‘Enterprise’ is based on a series of independent relationships and events that the government is trying to patch together like different types of fabrics and trying to pass it off as silk,” Farinella wrote.

A jury of seven men, five women and six alternates was selected last week. The trial is expected to several last weeks. If convicted on all counts, Kelly could face from 10 years to up to life in prison, according to prosecutors.

After the New York trial, Kelly will deal with a federal indictment in Chicago that alleges he conspired with two former employees to rig his 2008 trial. He has four pending cases in Cook County, alleging sexual abuse and assault. Kelly also has been charged in Minnesota with solicitation.