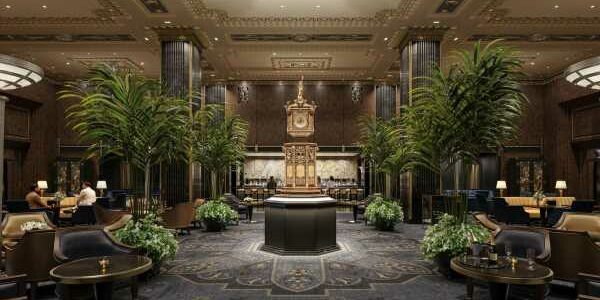 The Waldorf-Astoria’s Iconic Clock Is Ready To Run Again

The late 19th century saw the construction of some of New York’s most luxurious hotels, not the least of which was the Waldorf-Astoria. Originally two hotels, the Waldorf and the Astoria (constructed on adjacent lots and, at first, fierce competitors) were unified under one managing company following a truce between the feuding Astor family members who owned them.

In 1929, the original buildings, by then threadbare and expensive to maintain, were demolished and the Empire State Building constructed in their place, but a new Waldorf-Astoria Hotel—an Art Deco masterpiece intended to be unrivaled in  lavishness—was constructed at its current location on Park Avenue, opening to great fanfare in 1931.

Hub of high society as well as industry and political power, the Waldorf-Astoria had as its centerpiece—both at the original location and at the new tower—a magnificent clock, originally created by the Goldsmiths’ and Silversmiths’ Company of London for the 1893 World’s Columbian Exhibition, better known as the Chicago World’s Fair.

The clock was purchased by John Jacob Astor IV for the original location of the Waldorf-Astoria, and after the demolition, it was one of the few surviving fixtures to find a new home on Park Avenue, where it shone like a golden beacon in the lobby—a landmark and the site of countless rendez-vous—for over 80 years.

In 2017, the Waldorf closed for extensive renovations, and the clock, for the first time, was disassembled and moved to a studio in upstate New York for a thorough, and as it turned out, long-overdue restoration. The spectacularly restored clock is now on view at the New York Historical Society and will be returned to the Waldorf when renovations are completed.

Just getting the clock out of the Waldorf lobby and to the restoration workshop was logistically complicated. The clock is nine feet tall and weighs about 4,000 pounds. It’s constructed in four basic sections – the base, the middle, the clock section with four clock faces, and an upper section topped with a model of the Statue Of Liberty. (Lady Liberty was not part of the original design; she was a gift to Astor from the French government and added in 1902.) The disassembled clock was trucked upstate to Stair Restorations, where the actual restoration work took place.

One of the biggest challenges facing the restoration team was a lack of information from the original makers. The Goldsmiths’ Company was unable to locate any records in its archives. This meant that the restoration team at Stair, under the direction of head restorer Nigel Thomas (a 25-year veteran), had only written accounts and a few grainy photographs with which to evaluate the original state of the clock, and the changes it had undergone over the decades.

Original elements are missing—most notably a circle of animated figures which once marched around the top of the octagonal middle section. The figures were misplaced when the clock was moved to the Park Avenue Waldorf-Astoria and have never been found. The base of the clock has also changed over the years. There are actually three bases, one inside the other. “The ‘third-generation base’ is a sort of banquette,” Thomas told Hodinkee, “and we found two more [earlier] bases inside it,”–including the original marble base.

Alarmingly, the clock had also become structurally unsound. Thomas says that at some point—possibly during the installation of the magnetically driven gongs (the clock strikes the Chimes Of Westminster), which replaced the original mechanical striking system—part of the supporting frame had been cut out, allowing the clock to gradually settle into a tilted position.

The four clocks show the time in four different cities: New York, Madrid, Paris, and Greenwich, England. Each dial also has a small inscription advertising Elgin watches—a mysterious element, as Elgin was one of America’s biggest watch and clock makers; not a name you’d expect on the dials of an English-made clock.

The likeliest explanation is that the original mechanical movement was at some point replaced by an electric one, though when this was done is unclear. An issue of the Bulletin Of The National Association Of Watch And Clock Collectors from 1960 mentions the replacement of the mechanical movement with an electric one from Elgin; perhaps the inscriptions were added at the same time.

In Thomas’ words, the clock has “led a hard life,” and most of its exposed surfaces were very much the worse for wear. Decades of cleaning, pollution, and constant running had left most of the exposed surfaces of the clock in need of repair and refinishing. Many of the decorative elements, including Lady Liberty, are in ormolu, a type of gilded bronze. The original process used a poisonous mercury amalgam, and gilders often died before the age of 40 from mercury poisoning.

The ormolu work on the clock had to be cleaned and replated, and the panels in the tall octagonal section had their plating removed (the base material is pressed copper) and replaced. The goal was not to return the clock to “as new” condition but rather to preserve the patina it had acquired while ensuring continuity in finishing and structural integrity.

The results show the clock, not as it was originally delivered to the World’s Fair in 1893, but as it became known over the years as the centerpiece of the Waldorf-Astoria’s lobby and one of New York’s most recognizable landmarks.

With the layers of grime accumulated over the decades cleaned off, and the finish restored on all exterior surfaces, the remarkable visual richness of the clock can be seen, as well as the interplay of different finishes and surfaces. The figure of Lady Liberty gleams as if lit by the rising sun. (There’s a story that the placement of Lady Liberty on the clock so offended Queen Victoria that she tried to buy the clock back. As the statuette was added in 1902 and Queen Victoria died in 1901, the story is probably apocryphal. Fun though.)

At each corner of the upper section holding the clock’s dials, there are small pegs which once held additional figurines (visible in the photograph from 1893) which, in keeping with the conservator’s approach, the restoration team did not attempt to reproduce or replace.

Silver plating has been restored on the high relief images on the lower octagonal section, where one can find portrayals of Queen Victoria, Benjamin Franklin, George Washington, Andrew Jackson, William Henry Harrison, Abraham Lincoln, Ulysses S. Grant, and Grover Cleveland. Below each bust are panels showing scenes of swimming, running, yachting, cycling, baseball, trotting, and horse jumping, as well as a scene of the Brooklyn Bridge, which had opened in 1883 – just ten years before the clock was delivered to the World’s Fair.

While it’s tempting to see evidence of years of negligence in the contrast between the clock’s condition before and after the restoration, Thomas is reluctant to call anyone culpable: “You have to be careful when apportioning blame for this sort of thing … often, prior work was done by people where not so much careless as simply working under tremendous time and pressure.”

He notes that while a certain amount of structural repair work was necessary – when the restoration began, for instance, the entire upper section of the clock had been, at one point, reassembled so that it was supported only by the moulding underneath it—such issues are easier to understand if you bear in mind the constraints under which such work would have taken place. The clock’s position as the centerpiece of one of the busiest hotels in the world meant that it, like the hotel, and the city itself, could never sleep.

The clock can be seen at the New York Historical Society and will take its place once again as the centerpiece of the Waldorf-Astoria’s lobby when the tower—which will have 375 hotel rooms, as well as 375 condominium residences—re-opens in late 2022.

Images courtesy Optimist Consulting; headline image, rendering of the clock as it will appear when installed after the Waldorf re-opens.

Hodinkee is the preeminent resource for modern and vintage wristwatch enthusiasts. Through in-depth reviews, live reports, and dynamic videos, Hodinkee is bringing watches to a 21st-century audience.