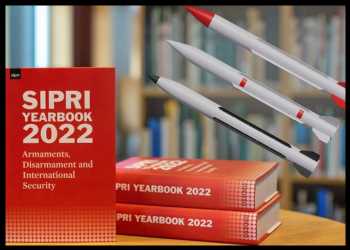 Despite a marginal decrease in the number of nuclear warheads in 2021, nuclear arsenals in the possession of world’s major powers are expected to grow over the coming decade, according to a new international report.

The Stockholm International Peace Research Institute (SIPRI) on Monday launched the findings of SIPRI Yearbook 2022, which assesses the current state of armaments, disarmament and international security.

A key finding of the report is that post-cold war decline in nuclear arsenals is ending.

The nine nuclear-armed states — the United States, Russia, the United Kingdom, France, China, India, Pakistan, Israel and North Korea — continue to modernize their nuclear arsenals and although the total number of nuclear weapons declined slightly between January 2021 and January 2022, the number will probably increase in the next decade.

Of the total inventory of an estimated 12 705 warheads at the start of 2022, about 9440 were in military stockpiles for potential use. Of those, an estimated 3732 warheads were deployed with missiles and aircraft, and around 2000 — nearly all of which belonged to Russia or the United Stataes — were kept in a state of high operational alert.

Russia and the U.S. together possess more than 90 per cent of all nuclear weapons. The other seven nuclear-armed states are either developing or deploying new weapon systems, or have announced their intention to do so.

China is in the middle of a substantial expansion of its nuclear weapon arsenal, which satellite images indicate includes the construction of more than 300 new missile silos. Several additional nuclear warheads are thought to have been assigned to operational forces in 2021 following the delivery of new mobile launchers and a submarine.

In early 2021 France officially launched a programme to develop a third-generation nuclear-powered ballistic missile submarine (SSBN). India and Pakistan appear to be expanding their nuclear arsenals, and both countries introduced and continued to develop new types of nuclear delivery system in 2021. Israel—which does not publicly acknowledge possessing nuclear weapons—is also believed to be modernizing its nuclear arsenal.

North Korea continues to prioritize its military nuclear programme as a central element of its national security strategy. While North Korea conducted no nuclear test explosions or long-range ballistic missile tests during 2021, SIPRI estimates that the country has now assembled up to 20 warheads, and possesses enough fissile material for a total of 45-55 warheads.

‘There are clear indications that the reductions that have characterized global nuclear arsenals since the end of the cold war have ended,’ said Hans M. Kristensen, Associate Senior Fellow with SIPRI’s Weapons of Mass Destruction Programme and Director of the Nuclear Information Project at the Federation of American Scientists (FAS).

‘All of the nuclear-armed states are increasing or upgrading their arsenals and most are sharpening nuclear rhetoric and the role nuclear weapons play in their military strategies,’ said Wilfred Wan, Director of SIPRI’s Weapons of Mass Destruction Programme.