There’s little doubt that the meetings, both virtual and in-person get-togethers spearheaded by US Secretary of State Antony Blinken, were meant to send a message to China that the US has resumed the Obama administration’s “pivot to Asia” that was so rudely interrupted by the erratic diplomacy and trade policies of the Trump years. 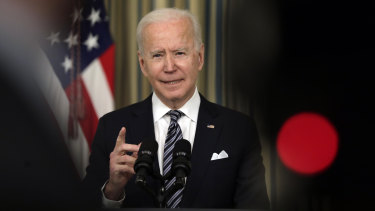 All eyes will be on Alaska this week for the Biden administration’s first face-to-face meetings with their Chinese counterparts.Credit:Bloomberg

It was, however, clearly meant to send a message of a renewal of unity among Washington’s traditional regional alliances to China, one buttressed by Peter Hartcher’s interview with America’s Indo-Pacific co-ordinator, Kurt Campbell, in which he said the US wouldn’t improve relations with China unless it stopped its economic coercion of Australia.

The Quad meeting was followed by physical visits by Blinken and US Secretary of Defence Lloyd Austin to Japan at the start of this week and then South Korea, where traditionally strong defence and trade relationships had been buffeted by Trump’s propensity to see every relationship in commercial terms.

On Thursday, having shored up, they hope, their regional alliances they will meet China’s most senior foreign policy official and State Council member Yang Jiechi and foreign minister Wang Yi in Anchorage, Alaska.

That’s going to be an awkward meeting, with the US already acknowledging that there will be some topics – human rights, Taiwan, Hong Kong and the South China Sea are the obvious ones – that will be difficult.

Blinken has said that the meeting is not a “strategic dialogue,” with no current plans for follow-up meetings. If there is to be further engagement, he has said, it will have to be based on tangible progress and outcomes on the issues the US is most concerned about.

China’s foreign ministry spokesman, Zhao Lijian, has, on the other hand, described the looming encounter as a “high-level strategic dialogue,” indicating just how far apart the starting point and aspirations for the summit will be.

China’s own ambitions for the meeting – Zhao described them as “demands” – are that the US adopt “an objective and rational attitude towards bilateral ties, abandon its Cold War mentality and zero-sum mindset, respect China’s sovereignty, security and development interests and stop interfering in China’s internal affairs.”

If the US relationships with Japan, South Korea and India continue to develop and Biden can re-establish a closer and more trustful relationship with the EU, it would be far more difficult for China to try to exploit the fissures in the alliances that the Trump years created.

None of that is going to happen, of course, with Biden and his administration’s officials leaving Trump’s tariffs and sanctions in place, conducting urgent review of America’s supply chain vulnerability to China and openly acknowledging that it is in competition with China for economic and geopolitical supremacy.

The whirlwind of meetings in the Asia Pacific followed an agreement earlier this month between the US and the European Union to suspend the retaliatory tariffs each had imposed over the long-running Boeing-Airbus dispute. The US had imposed tariffs on $US7.5 billion ($9.7 billion) of Europe’s exports and the EU duties on $US4 billion of US products over World Trade Organisation-ratified claims of state subsidies.

The suspension, for four months, is the first sign of a new phase in a bilateral relationship fractured by Trump’s trade policies, his abandonment of multi-lateral relationships and organisations and his insistence, as occurred with Japan and South Korea, that US allies pay for the US defence presence within their territories.

Biden has made it clear he wants to return the US to its traditional multilateralism and reconstitute the alliance of the West to present a united front to China. The defusing of trade tensions with the EU is a small first step to a thawing of the previously frosty relationship between the two key pillars of that alliance.

If the US relationships with Japan, South Korea and India continue to develop and Biden can re-establish a closer and more trustful relationship with the EU, it would be far more difficult for China to try to exploit the fissures in the alliances that the Trump years created.

It might find it painful, even impossible, to consider removing the sanctions it has imposed on Australian exports but it now has to factor in the potential costs of continuing US tariffs and sanctions.

The balance of power in the friction between Australia and China may not be as one-sided and loaded as it has been – and there is the growing threat that the tangible evidence of its willingness to use its economic leverage against lesser powers will only bind its regional neighbours closer to the US.

The EU is said to be considering its own sanctions on China for its treatment of the Uighurs, which could add another strand to the sense that China risks being encircled by the revival of a more coherent and strategic US approach to diplomacy, one which leverages shared histories and values and perceptions of threat.

While it is unlikely that the Anchorage meeting will produce any progress in resolving some of the key sources of friction between the US and China there are some less prickly items on the agenda – climate change, the coronavirus and Iran’s nuclear program are the obvious ones – where some broad agreement might be possible.

The Biden administration has made it clear it will raise sensitive issues, like human rights – the Uighurs and Hong Kong – and technology but that it doesn’t see tariffs or China’s compliance (or non-compliance) with the “Phase One” trade agreement as major topics, even though China does.

That makes it likely that the meeting won’t produce much of moment other than an attempt to restore civil communications in dealings between two countries whose future relationship, Biden has said when describing his administration’s approach, will be “competitive when it should be, collaborative when it can be and adversarial when it must be.”