The Biden administration’s strategy of encircling China with rebuilt alliances is having some early success, with the US, European Union, UK and Canada making co-ordinated announcements of sanctions on Chinese individuals and entities for their treatment of the Uighurs in China’s Xinjiang province.

The EU approved sanctions against four Chinese individuals and one entity for human rights abuses – “arbitrary detentions and degrading treatment” of Uighurs in Xinjiang, with China retaliating with sanctions of its own on 10 individuals – EU lawmakers – and four European entities. 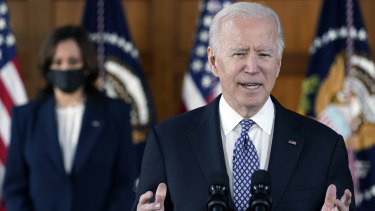 The energy and alacrity with which the US is re-engaging and its prioritisation of alliances over its own immediate interests is a demonstration of Biden’s commitment to rebuilding what Trump fractured.Credit:AP

The EU sanctions were the first it has imposed on China since the Tiananmen Square massacre in 1989 and came just ahead of US Secretary of State Antony Blinken’s arrival in Brussels in the latest leg of his whirlwind tour of traditional US allies as the new Biden administration tries to repair the damage done by Donald Trump’s “America First” approach to international relations.

Joe Biden’s virtual meeting with the leaders of Australia, Japan and India last week, and in-person meetings between Blinken and US Secretary of Defence Lloyd Austin in Japan and South Korea was designed to shore up US relations in the Asia Pacific.

Now Blinken wants to follow up a thawing of trade hostilities with Europe that developed under the Trump administration – earlier this month the US and EU agreed to suspend all tariffs linked to a dispute over subsidies to Boeing and Airbus – with an attempt to restore relations with the EU and NATO.

The international sanctions triggered an immediate and hostile response from China and the way an angry China responded to the EU’s sanctions won’t hurt Biden’s cause.

On December 31 last year China rushed to sign an investment pact with the EU – despite the EU being urged by the incoming Biden team not to ink the deal before it had an opportunity to discuss common concerns about China’s economic policies and human rights abuses.

The EU signed up, conditionally, anyway after China’s Xi Jinping ordered his team to make last-minute concessions to get the deal done before Biden was inaugurated and to create a hard-to-remove wedge between the incoming administration and the EU.

The agreement gave the EU greater access to China’s markets and is supposed to abolish forced technology transfers and create greater transparency around state subsidies for industry.

China’s decision to target members of the European Parliament who have been critical of its policies has created uncertainty as to whether the investment pact will be formally ratified by the EU, with members of the parliament warning that China’s sanctions put the deal at risk and that lifting them was now a pre-condition for ratification of the agreement.

That keeps alive the Biden administration’s hopes of enlisting the EU and its massive market for Chinese goods – along with its traditional allies in the Asia Pacific and, perhaps, unaligned countries like India that have friction in their own relations with China – in its efforts to contain China’s economic and geopolitical ambitions.

The obvious co-ordination behind the various Uighur-related sanctions announced by the US, EU, UK and Canada will concern China’s leadership. It could be a foretaste of worse to come if the pre-Trump band really does get together again.

The flurry of activity – and the acrimonious first meeting between senior US and Chinese officials in Alaska last week, where both sides used blunt and very undiplomatic language to criticise each other – has rebutted any suggestion that the Biden administration will be softer than its predecessors on China.

Indeed, ahead of the Alaskan meeting, the administration imposed sanctions on another 24 Chinese officials for their actions in reducing Hong Kong’s autonomy after China decided to introduce a “patriotism” test for public officials in Hong Kong. That set the tone for the meeting.

China is understandably unhappy with the latest Xinjiang-related sanctions, saying they were based on “nothing but lies and disinformation,” disregarded and distorted facts and grossly interfered in China’s internal affairs. It also said they “severely undermined” China-EU relations, which the US will see as a win.

China’s concerns about western sanctions is that its reach is limited outside its own jurisdiction whereas sanctions imposed by the US and its traditional allies have far wider application because of the US dollar’s role in the global financial system and global trade.

Those individuals and entities sanctioned in China and Hong Kong lose access to the international financial system and any assets they have offshore are at risk of being frozen.

Hong Kong lawmakers – including Hong Kong’s chief executive, Carrie Lam – have, for instance, lost access to their bank accounts and credit cards because US sanctions and the power of the dollar in global finance have forced even non-US banks operating in Hong Kong and China to comply with its directions.

The two countries most impacted by western sanctions – China and Russia – have been trying to develop a response to dollar domination and the weaponisation of the dollar-centric global payments system by first Trump and now Biden. It will inevitably be a topic of discussions this week during a two-day visit to China by Russia’s foreign minister, Sergei Lavrov.

China and Russia have been trying to denominate their own trade deals in each other’s currencies and encourage the use of the renminbi and rouble in transactions with other countries – in China’s case “de-dollarisation” is one of the ambitions of its “Belt and Road” initiative.

They’ve had limited success. While the use of China’s currency has increased it remains at low levels and the US dollar’s share of global foreign exchange reserves and trade invoicing, while somewhat lower than its peak, remains dominant.

Their best hope was to capitalise on Europe’s disenchantment and disengagement from Trump’s America, its own long-held ambitions for a larger role for its own currency and its resentment over the profligacy with which the Trump administration wielded the dollar’s dominance without consultation.

The energy and alacrity with which the Biden team is re-engaging and its prioritisation of alliances over its own immediate interests – making the removal of China’s trade sanctions on Australia’s exports a pre-condition for any meaningful improvement in its own relationship with China, for instance – is, however, a demonstration of Biden’s commitment to rebuilding what Trump fractured.

The obvious co-ordination behind the various Uighur-related sanctions announced by the US, EU, UK and Canada will concern China’s leadership. It could be a foretaste of worse to come if the pre-Trump band really does get together again.

Start the day with major stories, exclusive coverage and expert opinion from our leading business journalists delivered to your inbox. Sign up here.