Home » Economy » Marlene is inheriting millions. She wants the taxman to take it away.

Marlene is inheriting millions. She wants the taxman to take it away.

By the time her extraordinarily wealthy grandmother died last month, Marlene Engelhorn already knew whom she wanted to be the ultimate beneficiary of the enormous inheritance coming her way: the taxman.

“The dream scenario is I get taxed,” said Engelhorn, co-founder of a group called Tax Me Now.

Engelhorn, a 30-year-old who grew up in Vienna, is part of a growing movement of young, leftist millionaires who say they want governments to take a much larger share of their inherited wealth, arguing that these unearned fortunes should be democratically allocated by the state. 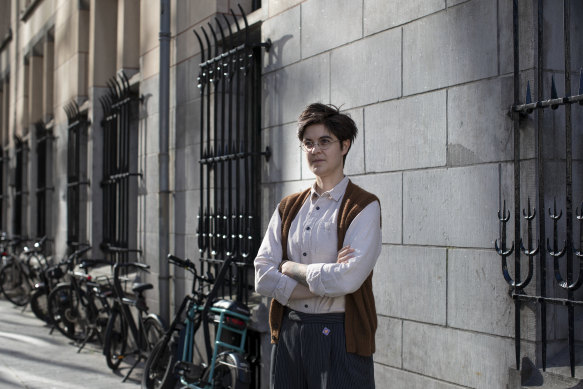 Marlene Engelhorn at a Millionaires for Humanity event in Amsterdam in August, where activists were calling for wealth to be taxed.Credit:New York Times

For more than a year, Engelhorn has been campaigning for tax policies that would redistribute her eight-figure windfall — and anyone else’s.

“I am the product of an unequal society,” Engelhorn said in a speech at a Millionaires for Humanity event in late August in Amsterdam, where activists were calling for wealth taxation. “Because otherwise, I couldn’t be born into multimillions. Just born. Nothing else.”

Her family is no stranger to giving away huge sums. Her grandparents poured a chunk of their fortune into supporting young scientists. Her great-uncle gave millions to an archaeology centre. His cousin pledged nearly $US140 million ($220 million) to classical music.

But in Engelhorn’s view, it should not be the wealthy who get to decide which personal interests and passions deserve their inherited millions.

“There’s no need for another foundation,” she said as she sat by a canal in Amsterdam. “What’s really needed is structural change.”

Philanthropy to her only replicates the same power dynamics that have created the systemic inequalities she wants to see dismantled, with new tax policies for the super rich an essential aspect of that vision.

The Engelhorn family’s multibillion-dollar fortune originated with Friedrich Engelhorn, who about 150 years ago in Germany founded BASF, one of the world’s largest chemical companies. Another family company, Boehringer Mannheim, which produced pharmaceuticals and medical diagnostic equipment, was sold to Roche for $US11 billion in 1997.

‘There’s no need for another foundation.What’s really needed is structural change.’

As a partial heir to that fortune, Engelhorn grew up in a mansion in a chic part of Vienna. She attended French-language schools, describing herself as the sort of student who was “correcting grammar mistakes when I heard them.” She played soccer with boys and read voraciously. She said she lacked any awareness of class privilege.

When she saw friends living in small appartments, she wondered why they did not choose to live in a big house with a garden, which is “much nicer.”

“Privilege really gives you a very, very narrow view of the world,” she said.

At university in Vienna, Engelhorn’s perspective began to broaden.

She volunteered with gay-rights groups and grew interested in the interconnection of racial, gender and economic discrimination.

In early 2020, as Engelhorn sat in a café in Switzerland, where she had gone to see her grandmother on her 93rd birthday, an accountant told her that upon her grandmother’s death, she would inherit many millions of euros.

He told her to enjoy herself. “He said, ‘This is just to be spent,’” Engelhorn recalled. “Like, ‘Just go play.’”

But to her, the news was more disconcerting than a cause for joy, spurring a tormented reckoning about her place in society.

“I was part of the problem,” she said she remembered thinking. “I am very woke and all, but now: What do I do with all these pretty thoughts?”

As she looked for advice, she entered the orbit of groups of pro-tax millionaires, whose members meet in person or on video calls to discuss their privileges — and how to get the state to strip them away. 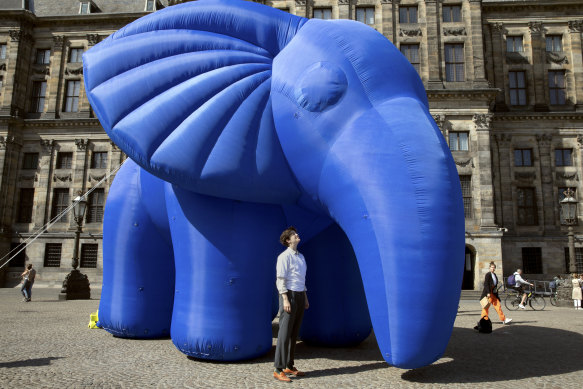 Engelhorn at the activist event in Amsterdam. The inflatable next to her is meant to represent “the elephant in the room” of tax justice. Credit:New York Times

Some of the members call the groups, which include Resource Generation and Patriotic Millionaires, a “safe space” where they can open up about what they call the “money story” — an honest account of the real origins of their social status. They acknowledge the crimes often at the heart of their family’s wealth and analyse the sexist and racist components that might have contributed to it.

Perhaps most importantly, the members are expected to share how they are engaged in what they typically term “reparations” to society.

Some of these groups emerged in the past 20 years or so, but recently, their memberships have expanded, driven by what Engelhorn calls “next gens of wealth” who have a different approach than many of their parents. Instead of trying to give away part of their inheritance, they are now asking how it is possible they inherited so much to begin with.

Newspapers have mocked some of the language of these groups, calling it sententious and self-reverential, and Engelhorn complained that some scornful press ridiculed them as “rich kids clubs.”

She credits the groups for helping her realise what could be done differently about wealth redistribution. If she had not encountered them, she said, “I might have also just settled with the status quo.”

Which is easy to do, she noted, “when you can literally afford not to care.”

After joining several of these groups, Engelhorn last year co-founded another one for Central Europe, Tax Me Now, described on its website as “an initiative of wealthy people who are actively committed to tax justice.”

Its policy goal is to implement or increase inheritance and wealth taxes (Austria, where Engelhorn lives, abolished its inheritance tax in 2008).

The number of nations in the Organisation for Economic Cooperation and Development that taxed net wealth dropped from 12 in 1990 to five in 2020. While a higher number of OECD countries tax inheritances, the amount collected accounts for 0.5 per cent of all taxes there.

To Engelhorn, the tax laws mean that it is not just huge amounts of wealth that are handed down; it is power, too, being distributed in a dynastic way. Taxing wealth, she said, would serve the dual purpose of increasing public resources and taking away political sway from people who have not democratically earned it.

“I don’t think that I should be in power or in charge the way that I could be if I use my wealth accordingly,” she said.

‘I don’t think that I should be in power or in charge the way that I could be if I use my wealth accordingly.’

After her speech in Amsterdam, Engelhorn was given an award for her activism.

“Of all the rich people” who had spoken at the event, Engelhorn was the one who spoke about the issue of taxation with the greatest passion and honesty, according to Djaffar Shalchi, founder of Millionaires for Humanity. “She is for me No. 1,” he said.

Whatever Engelhorn’s speaking abilities, she has helped generate interest in the issues of wealth and inheritance taxes. She recently published her first book, “Geld,” or “Money,” about wealth redistribution. And ever since her first public declaration of her desire for her inheritance to be taxed away, she has attracted attention in German-language media.

It is not the first time a member of Engelhorn’s family has made headlines with tax-related issues. When her great-uncle and archaeology donor Curt Engelhorn sold Boehringer Mannheim, German tax authorities did not collect any money because he had previously moved the company’s legal seat abroad.

Marlene Engelhorn’s multiple radio and TV appearances have resulted in dozens of people reaching out to ask her directly for financial help. She said it wrecks her to say no, but she believes it should not be on her to decide who gets her money.

“I would like tax justice to take this impossible decision off my hands,” she said.

She has committed to giving away at least 90 per cent of her inheritance and wants it to go to the state — but only in the form of a tax, not a donation. “A government who won’t use wealth taxes won’t get a gift just like that,” she said.

Not all millionaires share her passion for taxing wealth.

Ansgar John Brenninkmeijer, heir to a fashion fortune, interrupted Engelhorn when she was onstage in Amsterdam to ask her angrily if she knew what the wealth tax in the Netherlands was.

“We do have a wealth tax,” he said. “It’s 1.6 per cent,” he added, referring to a Dutch tax on the value of a person’s savings and investments.

To Engelhorn, that was a ridiculously low number.

But later that day, she said it should not be up to people like Brenninkmeijer — or herself — to say what is a fair rate.

This article originally appeared in The New York Times.