Home » Politics » At the Capitol on Jan. 6, Veterans Fought on Both Sides of an American Battle

At the Capitol on Jan. 6, Veterans Fought on Both Sides of an American Battle

WASHINGTON — As Samuel Hahn of the Metropolitan Police Department struggled to hold back rioters storming the Capitol on Jan. 6, a group of veterans among the protesters repeatedly yelled the same refrain at him: “Remember your oath. You’re breaking your oath.”

Officer Hahn, a Marine before joining the city’s police, listened in astonishment

“The oath that every member of the military takes is the same one as a police officer, which is to uphold the Constitution,” he later recalled. “There was this cognitive dissonance between what I was doing and what the people screaming at me were doing, which is the very thing that is antithetical to that oath.”

Veterans at the Capitol that day stood on both sides of the barricades after serving in every branch of the military and at all ranks. Some had deployed at the same time to the same regions of the world, and some bore the same physical or emotional scars of the era. They were all about the same age, and while their reasons for joining the military varied greatly, they shared a strong sense of patriotism, expressed in diametrically opposite ways.

Officer Hahn joined the military in 2010 to help prime him for an eventual job in law enforcement. Working as a Washington police officer is similar to his Marine service, he said, because “it is something larger than yourself.”

Then there were those like Jere Brower, who spent four years in the Army, but has also had brushes with the law and, according to news reports and law enforcement officials, has associated with white supremacist groups. He was an intense supporter of President Donald J. Trump — and ended up under arrest.

Inside the Capitol, another veteran, Eugene Goodman, wore the badge of the Capitol Police and led the rioters away from the Senate floor, likely averting tragedy.

Outside the building, just hours earlier, Pete Hegseth, the Fox News contributor who served with Officer Goodman in the 101st Airborne in Iraq, was on the air expressing sympathy for those protesting the election. (Mr. Hegseth said through a spokeswoman that he disagreed with the violent activities that ensued.)

Many of the rioters later insisted, according to news accounts and criminal complaints, that they believed that it was their right to enter the Capitol despite efforts by law enforcement to keep them out. They also believed that their actions had the support of Mr. Trump, who they said had encouraged them — at a rally earlier that day — to shore up his case that the election results were fraudulent.

For some veterans who were among Mr. Trump’s strongest supporters, his repeated false claims of a stolen election took on an added urgency, given that the president is the commander in chief. Ashli Babbitt, the Air Force veteran killed by the police inside the Capitol, had retweeted a post that predicted a violent uprising that would lead to Mr. Trump’s second inauguration. “Nothing will stop us,” she wrote on Twitter the day before the riot.

Sgt. Tyrone Gross, a Washington police officer who spent a year in Iraq as an Army specialist, expressed some understanding of the veterans confronting him at the Capitol, but his sympathy only went so far.

“I would say this was somewhat similar to being in Iraq,” Sergeant Gross said. Like the Iraqis he saw when he was deployed, “The people who were at the Capitol that day were passionate about what they believed.”

“Except,” he added, “I didn’t get sprayed with bear spray by people there, and I didn’t meet with as much resistance with people in Iraq as I did by the people at the Capitol.”

Veterans, like all Americans, have disagreed over politics since Alexander Hamilton and Aaron Burr dueled more than 200 years ago. 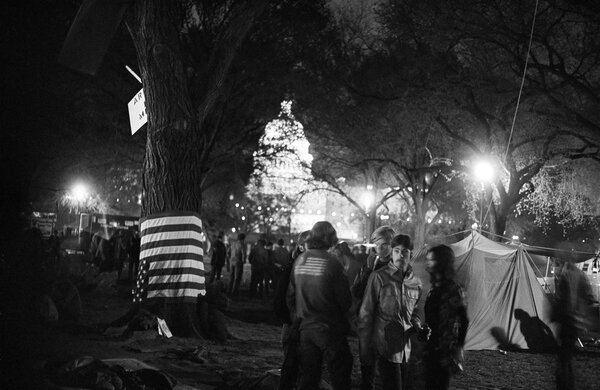 Divisions among veterans were particularly accentuated during and after the Vietnam War, when some denounced the conflict they had fought in.

Over the last four years, militia movements and their informal offshoots, often buoyed by veterans as well as some members of law enforcement, fashioned themselves as enforcers of Mr. Trump’s policies and proclamations. When they were not taking on Black Lives Matter demonstrators or protesting, at times menacingly, coronavirus containment measures, they trafficked in conspiracy theories and outright falsehoods, such as Mr. Trump’s insistence that he won the 2020 election.

“There has never been a consensus in the ranks of the military about the political objectives of the force,” said Phillip E. Carter, a Georgetown law professor and expert on veterans issues. “Not during the War for Independence, certainly not during the Civil War, and not even during World War II.

“Historically, most of these divisions have not mattered much, either during service or afterward,” he said. “Today seems different, perhaps because of how deeply polarized we all seem, and because of the societal upheaval caused by the pandemic.”

While federal authorities are still working to identify many of those who showed up at the Capitol that day, a preliminary examination of the arrest data suggests that 13 percent to 20 percent of those charged have military backgrounds, about the same percentage of the members of militia groups nationwide that experts estimate are veterans.

Many of the groups are anchored in racist ideologies. “It has become clear for some time we have a problem with white supremacists in positions of trust,” said Katrina Mulligan, a former Department of Justice official who is now managing director of national security and international policy at the Center for American Progress, a liberal think tank. “The biggest problem is in our veterans community.”

The military has rules forbidding associations with extremists groups, but those rules do not bind people who leave the service and are often recruited by those groups for their tactical skills.

“Part of what was so horrifying about what happened that day is you saw training in action,” Ms. Mulligan said of the Capitol riot.

Some of the bifurcation of veterans on Jan. 6 stems, experts say, from the military’s failure to screen and root out extremists from its ranks, something Lloyd J. Austin III, President Biden’s new defense secretary, has vowed to tackle.

“The problem is we don’t understand the full scope of it,” said John F. Kirby, a spokesman for Mr. Austin, who last week convened the military chiefs and civilian secretaries of the armed forces to begin intensifying the Pentagon’s efforts to combat extremism in the ranks.

When Kat Brower met her former husband, Jere, in college, he told her tales of heroism about his time as an Army specialist. A 2011 news article he showed her falsely described him as having nearly lost his arm in Iraq. In fact, Mr. Brower never deployed overseas during his four years of service, according to a Pentagon spokesman.

His personal history in public records includes criminal charges, including burglary and cocaine possession, some predating his service, which began in 1996 and ended in 2001. In 2000, according to news reports quoting law enforcement officials, he was part of a group of Aryan Nation supporters who handed out racist literature inside an Idaho courthouse. Law enforcement officials in Idaho said he was involved in an incident in the city of Coeur d’Alene along with others who were identified as Aryan Nation supporters.

Ms. Brower said her ex-husband convinced her to join the Army as a way of supporting them both and she agreed. “I thought it would make me understand him better,” she said.

The two ended up in Germany where, she said, their marriage deteriorated.

When she saw the Capitol riot on television, she assumed her former husband was among those arrested, she said; he is now facing charges of curfew violations and unlawful entry in the District of Columbia but has been released. “I think he was there because he hated,” Ms. Brower said.

Mr. Brower’s lawyer said he could not be reached for comment.

Sergeant Gross, 50, remembers turning on his police radio on Jan. 6 and hearing that the Capitol had been breached. “I grabbed six others guys,” he said, and they made their way on motorcycles to the carriage entrance of the Senate side of the Capitol.