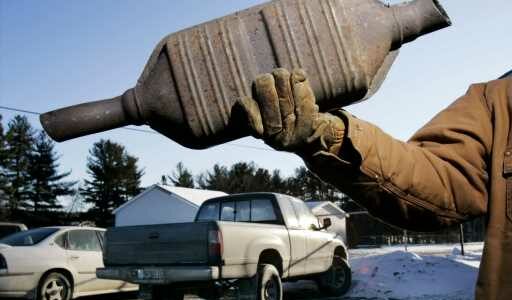 Any catalytic converters worth $30 or more are now subject to new licensing and reporting requirements after Aurora City Council members unanimously approved an ordinance Monday night.

Catalytic converters — emission-control devices — and gift cards were added to the city’s definition of “secondhand property.” State lawmakers passed SB22-009 this year requiring that scrap buyers keep a record of catalytic converter purchases, but the law doesn’t require them to be reporting an electronic system, rather just kept on file.

According to a staff memo, Aurora had started requiring last year catalytic converter buyers to report the purchases to Leads Online, and “the secondhand dealer license is used as a tool to ensure buyers are following the required practices of reporting their purchases.” The ordinance clarifies exactly what is defined as secondhand property and backers hoped it would encourage other cities to follow suit, something Denver council members had requested when passing a similar law earlier this year.

Unlike Denver’s law, however, Aurora’s will not require catalytic converters purchased for less than $30 to be regulated this way, “as it is unlikely that those with that low of 83 a value would be stolen,” according to council documents. The Aurora ordinance also requires anyone selling more than one of these devices to demonstrate business information about why they have more than one.

Aurora only has one “full time scrap buying operation,” and city officials said it has stopped purchasing catalytic converters from consumers and only takes them from businesses. But an auto shop that buys them and ships them out of state is located in the city, and “(t)here is the potential other buyers will be discovered and the requirement to license and report can be enforced.”

Secondhand dealer licenses are $600 per application and $150 annually for the license fee, and city officials said the added clarity in the definition of secondhand property may lead to additional businesses applying for licenses.

“Catalytic converter thefts have increased dramatically in recent years,” council documents stated. “(Thieves) cut off the motor vehicle part and resell the part for the value of the precious metals it contains including platinum, palladium and rhodium. The theft of a catalytic converter can cost the victim several thousand dollars to replace it.”