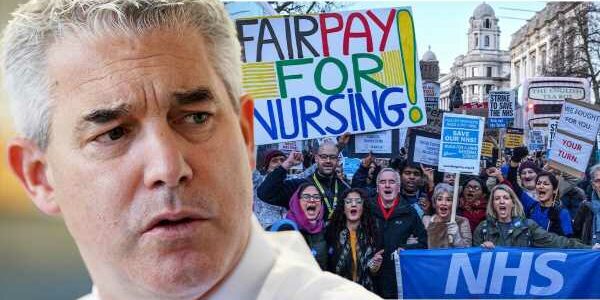 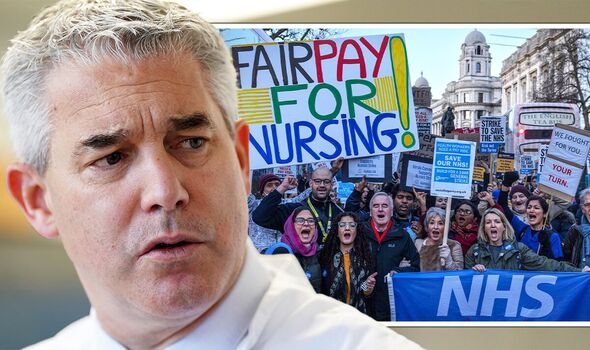 Health Secretary Steve Barclay has warned nurses hitting the picket lines today that their demands will only hurt the most vulnerable in need of care in the NHS. Nurses are still demanding a 19 percent pay rise which would cost the taxpayer more than £13billion a year.

In an article for the Independent, Mr Barclay warned that action taken by nurses today threatens to undermine efforts to tackle waiting lists and get a grip on the NHS crisis.

And he warned that the pay demands of nurses will just divert financial resources needed for other areas of the NHS.

The minister said: “If we provide unaffordable pay rises to NHS staff, we will take billions of pounds away from where we need it most. Unaffordable pay hikes will mean cutting patient care and stoking the inflation that would make us all poorer.”

He went on: “Everyone in healthcare wants the best for patients. Ministers want to work with union leaders to improve the NHS and deliver better care. Last week I announced £200 million to block book beds in care homes to speed up the discharge of patients who are medically fit to leave hospital.

“That sum comes on top of £500m unveiled in the chancellor’s autumn statement.”

He added: “The nurses’ strike on Wednesday and the further walkouts for next month announced by the Royal College of Nursing (RCN) on Monday will pile on further pressure at this challenging time.

“Around 30,000 procedures or outpatient appointments were postponed as a result of nurse strikes on 15 and 20 December, so I am disappointed that patients face disruption again.”

His comments come as Pat Cullen, the general secretary of the Royal College of Nurses (RCN), told Radio 4’s Today program that the union is “willing to meet the government halfway.”

She also denied claims that the rejection of a more generous pay deal by the RCN in Scotland meant that they would do the same in England.

Ms Cullen insisted that the action was aimed at helping NHS patients.

But Mr Barclay has warned that future pay deals will mean structural changes in the NHS.

He said: “I know we can find a fair way to resolve this. I want to continue the constructive dialogue with union leaders about how to make the NHS a better place to work and deliver better care for patients.

“I want to work with the unions to identify areas where the NHS can become more efficient. That could both relieve administrative burdens on staff and unlock additional funding to top up affordable pay rises for the coming financial year.”