The world’s major automakers believe that electric vehicles will direct the car industry in the years ahead. But as different parts of the world adopt electric driving at different rates, will Germany get left behind? How ecologically aware and environmentally friendly will its future be?

Germany’s car culture – hovering between a past of petrolheads and a future of green zealots – is up for debate at the polls as the country moves on Sunday to pick the candidate to succeed Angela Merkel as German chancellor.

Baerbock, whose opposition party is running third in polls ahead of Sunday’s election, advocated for an earlier exit from coal as a source of electricity at a debate this past weekend, saying that the current government had not done enough to limit climate change. She said Germany needs a "new start" on the issue.

"The next government must be a climate government," she said.

The billionaire said he hopes to begin production at the Gruenheide facility this fall.

Tesla had initially planned to begin manufacturing in July, but legal problems and permit issues led to delays.

"We’re looking forward to hopefully getting the approval to make the first cars, maybe in October if we’re fortunate," Musk told reporters.

"Giga Berlin-Brandenburg county fair & factory tour on 9 October!" the SpaceX founder later tweeted, noting that while Berlin and Brandenburg residents would get priority access, the event would be open to the general public.

With nine days to go before the German election, activists unfurled a three-story banner on Berlin’s main train station designed as a vacancy ad seeking a new "climate chancellor."

Polls show that climate change is the most important issue for voters going into the Sept. 26 election, but many voters are wary of the possible costs associated with the large-scale changes required for Germany to become carbon neutral. 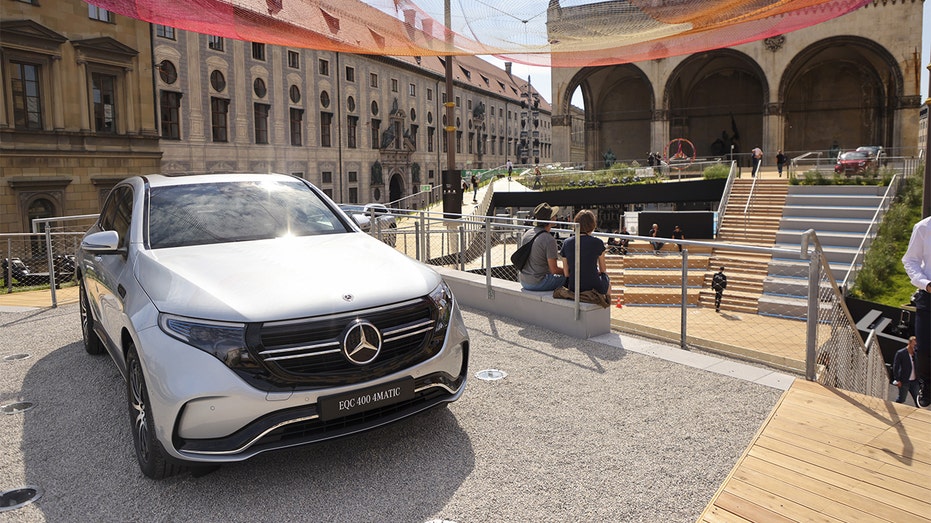 The car culture may have no choice but to adapt.

Doubt about electric vehicles remains high in the central European country, however. A February 2021 survey of 22 countries found Germany the most skeptical, with 58% of respondents saying that their next car would "probably not" be electric.

Approximately every 50th worker in Germany is employed in the automobile industry, and the country’s car culture really took off during the "economic miracle" of the 1950s with the know-how of carmakers like Volkswagen and BMW.

Even so, Germany appears to be taking baby steps in the right direction.

Since battery-only cars are rated at zero emissions, automakers have turned to them to bring down their fleet averages. That led to a surge in electric sales at the end of 2020. In December, nearly one in four cars sold in Europe was either battery-only or a plug-in hybrid.

Electric vehicle registrations in Germany increased by more than 300% last year thanks to purchasing incentives in the country's pandemic stimulus package.

Electric vehicles on German roads crossed the 1 million threshold in July, the government said in a press release.

"Our transport will be irreversibly converted to renewable energies," said economy minister Peter Altmaier, calling the news a "decisive milestone."

The future government will be required to curb combustion engine emissions accordingly within the next 14 to 29 years. The country aims to have 14 million electric and plug-in hybrid vehicles on the road by 2030.

"Germany’s chances of becoming a champion of electric mobility are not perfect, but they are still pretty good," said Patrick Plötz, a transport economist at the Fraunhofer Institute in Karlsruhe. "The big manufacturers have finally clocked to what’s at stake."

Tesla did not respond to Fox News' request for comment by press time.