Home » Politics » House approves measure to protect abortion rights amid threats from states and the courts. 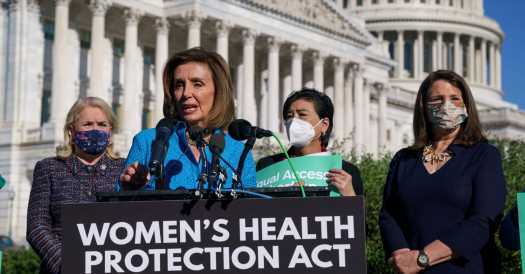 House approves measure to protect abortion rights amid threats from states and the courts.

The House on Friday narrowly approved a measure intended to enact abortion rights into federal law, as Democrats sought to counter efforts at the state level to restrict abortions and growing hostility to abortion rights from the conservative-leaning Supreme Court.

Acting after the high court refused to block stringent new Texas limits on abortion, lawmakers voted 218 to 211 to send the Women’s Health Protection Act to the Senate, where it is unlikely to pass. Senator Chuck Schumer, Democrat of New York and the majority leader, is expected to announce, though, that he will bring the measure to the floor in the near future.

Democratic authors of the measure heralded the vote as historic, given what they described as mounting threats to the 1973 Roe v. Wade decision establishing a right to abortion. They framed it as a sharp rebuke to the Supreme Court for allowing the Texas law prohibiting most abortions after six weeks to go into force earlier this month.

“If the justices over there in that building won’t act, this House of Representatives will act,” said Representative Diana DeGette, a Colorado Democrat and a longtime backer of abortion rights.

Speaker Nancy Pelosi, who called for the measure to be considered quickly after the Texas decision, lashed out at the court for failing to intercede to block the new law, arguing that it had ignored 50 years of precedent on abortion.

Republicans uniformly opposed the measure, which they called extreme and said would lead to abortions at all stages of pregnancy and overturn hundreds of state laws. They said the measure went far beyond codifying Roe and should more rightfully be called the “Abortion On Demand Until Birth Act.”

“This abortion on demand bill would destroy our country’s future,” said Representative Jackie Walorski, Republican of Indiana. “A child in the womb is a living person, and yet my colleagues on the other side remain obsessed with killing unborn babies in the name of female empowerment.”

“This will nullify every modest pro-life restriction ever enacted by the states,” said Representative Chris Smith, Republican of New Jersey. “This bill constitutes an existential threat to unborn babies.”

Democrats said the measure was urgently needed since the Supreme Court would later this year to consider a Mississippi law that abortion rights activists fear could lead to further erosion of Roe v. Wade, or its outright overturning.

In the Senate, Mr. Schumer had not previously committed to allowing a vote on the measure, which would almost certainly be blocked by a Republican filibuster. The Democratic leader has been reluctant to force votes in the 50-50 Senate on measures that don’t have a minimum 50 votes, and at least two Democrats have not endorsed the House bill.