Fate of Boris Johnson is now in the hands of tough civil service boss, Sue Gray 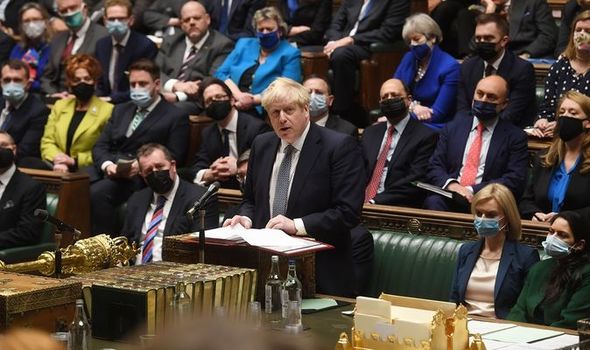 Whitehall mandarin Sue Gray, who previously ended the careers of two Cabinet ministers, is probing a string of claims about gatherings. They include the Prime Minister and his then fiancee Carrie reportedly attending a “bring your own booze” event in the garden of 10 Downing Street in May 2020. Ms Gray could wrap up her inquiry as early as next week, although no timetable has been set.

Cabinet Office permanent secretary Ms Gray is a former ethics chief. She probed Tories Andrew Mitchell over “Plebgate” in 2012 and Damian Green in 2017, when pornography was found on his Commons computer. Former senior civil servant Sir David Normington said Ms Gray, 65, was the “best person” to look into the allegations.

He said yesterday: “She has the confidence both of people who worked in previous governments, Labour and Conservative governments, so we are where we are.” Sir David said it was “fairly unprecedented” for a civil servant to be investigating the behaviour of the Prime Minister and senior officials in No 10.

He said: “She will be very aware that she has the reputation and possibly the careers of senior civil servants and possibly of the Prime Minister in her hands. “That is a very difficult position to be in, however fair and fearless and rigorous you are.” Yesterday Mr Johnson vowed to make a Commons statement once the inquiry concluded.

During a stormy session of Prime Minister’s Questions, Mr Johnson offered “heartfelt apologies” for the “things that we simply did not get right”. He said: “All I ask is that Sue Gray be allowed to complete her inquiry into that day and several others, so that the full facts can be established. I will of course come back to this House and make a statement.”

Mr Johnson urged Labour leader Sir Keir Starmer to wait for the findings of the probe and “study it for himself”. Environment Secretary George Eustice said circumstances were different in No10 in May 2020 than for other workplaces.

He said: “At that particular point obviously, most of us were working from home and even doing interviews from home. But it was different in No10 in the sense that the Prime Minister lives there and works there and there was a team dealing with Covid who were working there and had to work from there.”

Mr Eustice admitted it was a “very difficult, uncomfortable time for the Prime Minister”. But he said it was for Ms Gray to investigate the reported events. Asked if the Prime Minister would resign if Ms Gray’s report exposed wrongdoing, Mr Eustice said: “I don’t think we should get ahead of ourselves here. We should take this a step at a time.”

Ms Gray was brought in to take over the investigation after her boss, Cabinet Secretary Simon Case, recused himself following allegations his own office had held a Christmas event in 2020.

She will look into seven gatherings, including claims that a No 10 event was held on December 18 2020 – the first allegation of rule-breaking parties. At the event, Government officials and advisers reportedly made speeches, enjoyed a cheese board, drank together and exchanged Secret Santa gifts.

Mr Johnson, however, is not thought to have attended. Allegra Stratton, the Prime Minister’s spokeswoman, quit after being filmed joking about it with fellow aides at a mock press conference.

The “bring your own booze” party that led to yesterday’s apology by Mr Johnson was revealed after an email, leaked to ITV, was sent by Martin Reynolds, the PM’s principal private secretary, to more than 100 Downing Street employees. Mr Reynolds also reportedly attended the December 18 Christmas event.

In the Commons yesterday, Mr Johnson admitted attending the May garden gathering for about 25 minutes. But he insisted he “believed implicitly that this was a work event” and “with hindsight, I should have sent everyone back inside”.

More details of the event emerged yesterday, including claims that officials and advisers drank wine, gin and beer. One Government member reportedly joked about being caught breaking lockdown rules and asked how it would look if a drone photographed the garden.

Another who was at the event reported that Mr Johnson had been seen “wandering round glad-handing people”. Mr Johnson’s ousted former aide, Dominic Cummings, dismissed the Prime Minister’s explanation that he thought the garden event was within the rules as “b*******”.

The ex-adviser, 50, who has become one of Mr Johnson’s fiercest critics, claimed he had objected to the invitation to the gathering sent out by Mr Reynolds because it was “obviously totally social, not work”. Mr Cummings said the Prime Minister told MPs he believed the event was “technically” within the rules” because the alternative was to admit he had broken the rules and resign.

THE Last Chance Saloon has welcomed many patrons since Tory politician David Mellor invented the phrase more than 30 years ago. But there is no doubt that Boris Johnson is drinking in it now. He has been brought low not by the brilliance of his opponents – after all, Labour remains an unelectable rabble – but by his own mistakes and misdeeds.

In the grand scheme of things, he has done a good job since taking over from Theresa May 2½ years ago. He got Brexit done, as she failed to do, and he showed real courage in his quest to honour the referendum verdict of the British people. He also smashed Labour at a general election – another feat that had proved beyond her.

Even on Covid, Johnson’s overall record looks pretty good. On the debit side of his account one could argue that he was slow to appreciate the extent of the crisis and then indecisive over a second lockdown in autumn 2020.

But on the credit side, he unleashed the fastest vaccination programme in Europe, unlocked Britain in July, ramped up boosters in the autumn and refused to lockdown again this Christmas. He has also demonstrated a talent for talking up the country when so many politicians talk it down and is right to have identified “levelling up” the parts of Britain in danger of being left behind.

And he has proved to be the PM prepared to put in place a settlement for our threadbare social care system – a challenge flunked by predecessors from Tony Blair to David Cameron. But a blind spot in his vision has gone uncorrected. That is a tendency to treat his inner-circle with more leniency than he accords the public.

Hence the mess he got into over who would pay for the refurbishment of his Downing Street flat; over his decision to exempt himself from “pingdemic” requirements; and over his attempt to scrap Commons standards procedures in order to save his mate Owen Paterson from a damning sleaze verdict.

Above all there is the scandal of the various Downing Street gatherings and parties that took place during lockdowns. Just because he is a natural communicator who has generally managed to talk himself out of tight spots, it does not follow that Johnson can get away with adopting the same cavalier approach as prime minister.

If he is prepared to correct this flaw, or at least to bring in a new advisor with the gravitas to do that for him, then he can still be a long-serving, highly successful premier. But the excesses of his court at No10 are close to becoming unforgivable.

When compared with the exemplary national leadership provided by the Queen, including sitting alone and masked at the funeral of the Duke of Edinburgh, it is clear how far off the mark he has been. As Her Majesty showed, true leadership involves self-discipline and sacrifice.The PM simply has to improve on both those fronts, or those who once wished him well are going to walk away.