As Joe Biden closes in on the 100-day mark of his presidency, a Fox News poll finds a 54 percent majority of voters approves of his job performance.  That’s lower than Barack Obama’s 62 percent and George W. Bush’s 63 percent approval at their respective 100-day points, but higher than the 45 percent Donald Trump received four years ago. 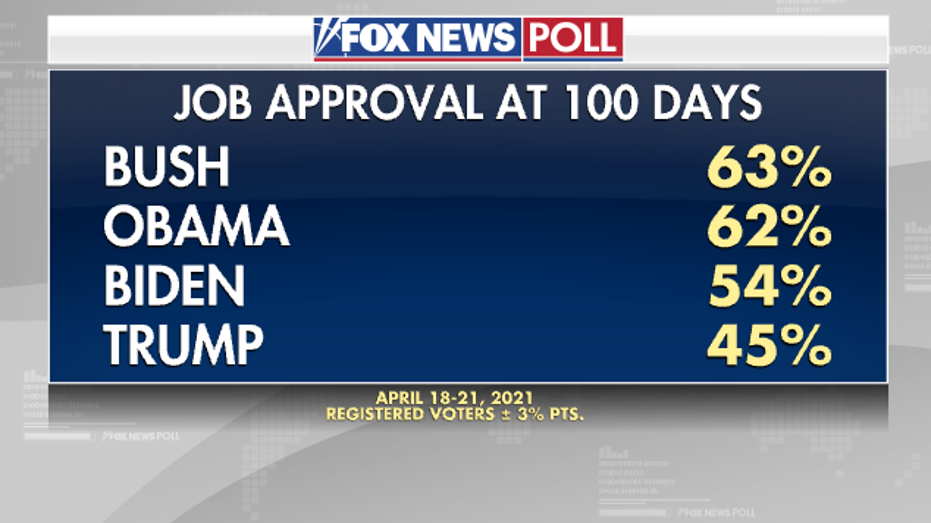 There is an 81-point gap on approval of President Biden between Democrats (95 percent) and Republicans (14 percent).  That’s even a bit wider than the 76-point partisan gap for former President Trump in April 2017.

In addition, concern about coronavirus stands at a record low, and the highest percentage ever say the virus is at least somewhat under control.  Eighty-one percent feel it is under control, an increase of 34 points since December. 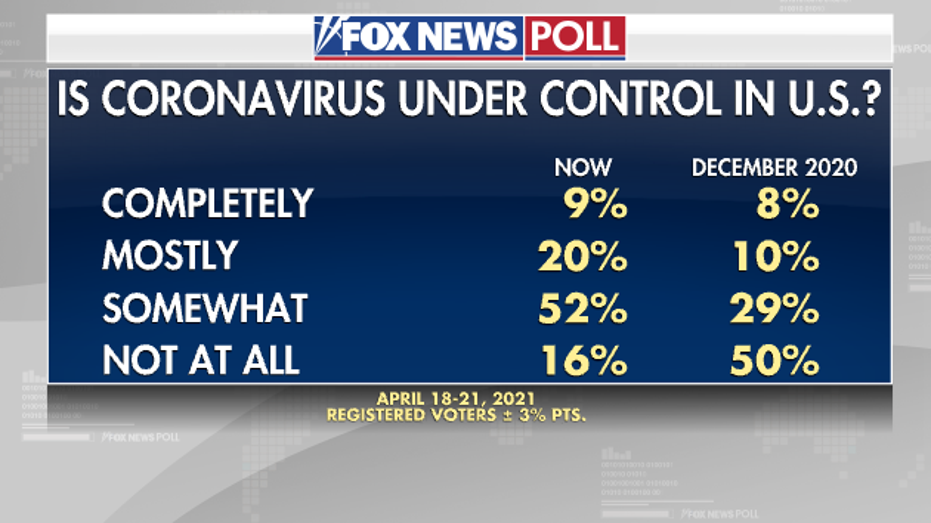 Biden’s best poll shows his handle on the coronavirus pandemic

That’s the best news in the poll for Biden.

By a 31-point margin, voters say border security is worse than it was two years ago, a 56 percent majority thinks Biden winning the election is completely or mostly behind the increase of migrants at the U.S. southern border, and 67 percent are extremely or very concerned about illegal immigration.

Views on the economy are more than two-to-one negative: 29 percent rate it as excellent/good and 69 percent say only fair/poor. That’s little changed since the end of Trump’s term, when it was 33-66 percent.  However, in January 2020, before the pandemic, 55 percent rated economic conditions positively, including a record 20 percent saying "excellent." 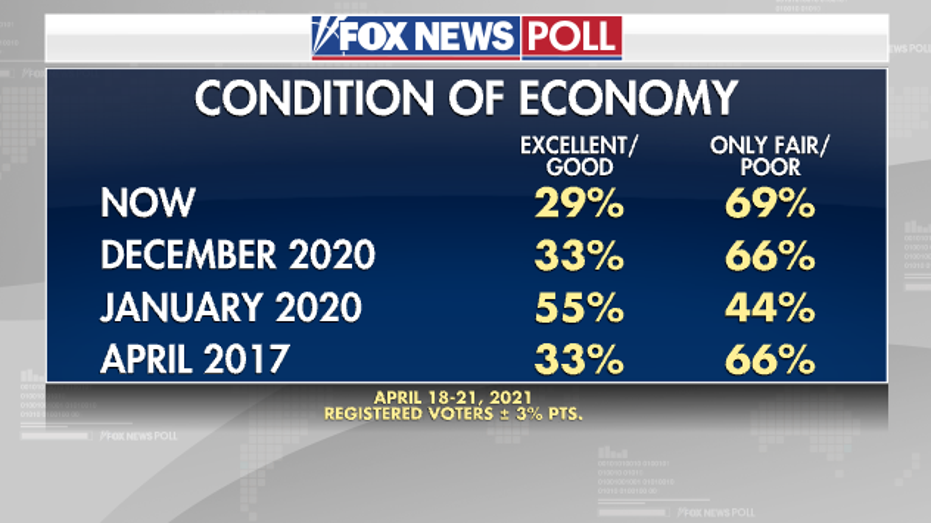 The U.S. economy under Biden for his first 100 days

The consistency between the current ratings and those in December disguises major shifts among partisans as they adjust to the change in the occupant at the White House.  Today, 46 percent of Democrats rate the economy positively, up 25 points since December.  And just 17 percent of Republicans rate it positively now, down 34 points.

The national poll, released Sunday, also shows that while 53 percent of voters are unhappy with how things are going in the country, 45 percent are satisfied — the highest since January 2018.  Since last summer, the last time Fox asked the question, satisfaction among Republicans has turned to dissatisfaction and vice versa among Democrats.  Dissatisfaction held steady among a majority of independents.

Among Hispanics, a group whose 2020 election support for Biden lagged expectations, his 72 percent approval overall drops to 54 percent for his handling of immigration and 44 percent for border security.

Both Democrats and Republicans express high levels of concern (at least 60 percent extremely or very concerned) about the economy, gun laws, health care, and infrastructure.  Beyond those issues, strong partisan differences emerge.  The top three worries among Democrats are climate change, racism, and health care.  For Republicans, it’s illegal immigration, the economy, and voter fraud.  Voter fraud comes in last for Democrats, while climate change is the lowest concern for Republicans.

In general, voters say they want lower taxes and less government.  By a 56-36 percent margin, they prefer paying lower taxes and having a smaller government that provides fewer services to higher taxes to support larger government/more services.  Yet nearly half favor Biden’s $2 trillion dollar infrastructure plan (49-41 percent), and majorities favor paying for that plan by increasing taxes either on businesses and corporations (56-39 percent) or families earning over $400,000 a year (63-33 percent). 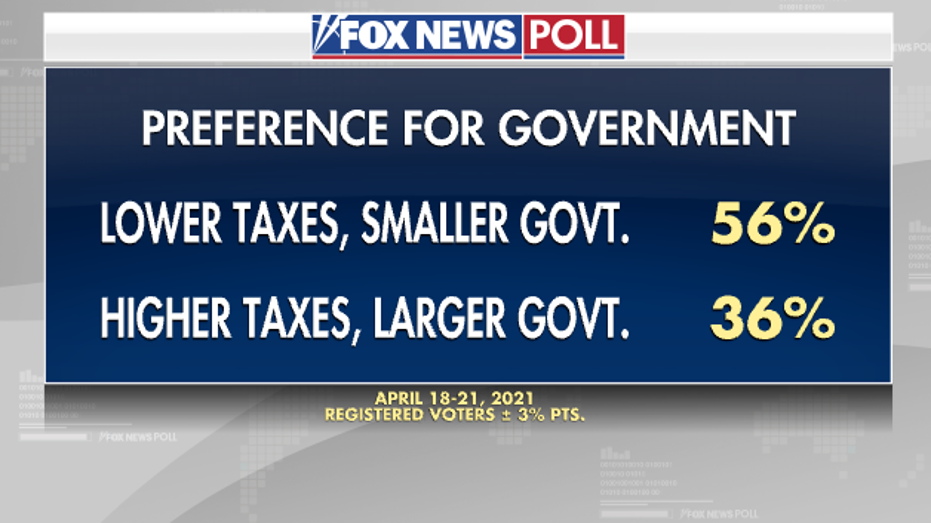 Preference for government under Biden administration

A majority of 54 percent is against increasing the number of justices on the U.S. Supreme Court (35 percent in favor). 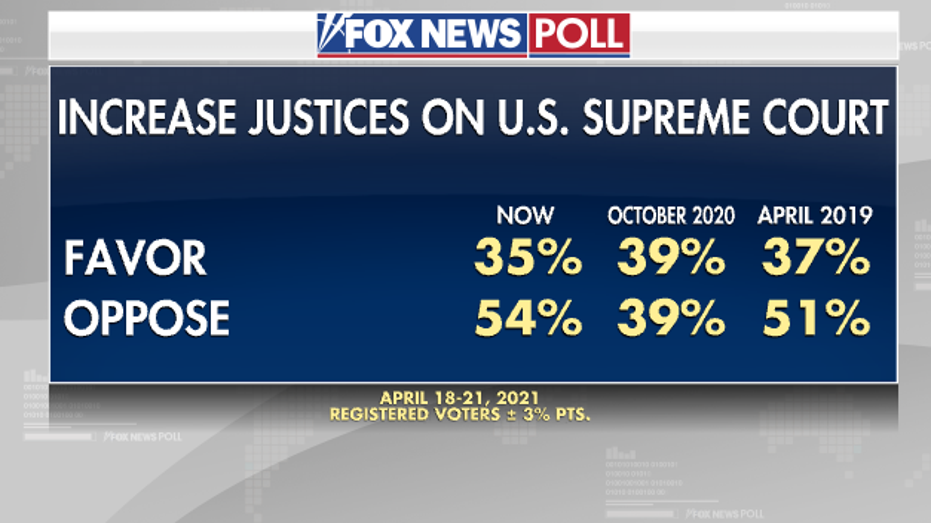 Increase Justice on Supreme Court under Biden administration after 100 days

Regardless of how they voted in the election, over three-quarters of voters (78 percent) want Biden to succeed, including 60 percent of Republicans.  That’s about the same as the 80 percent overall and 63 percent of Democrats who felt that way about Trump in his first year. 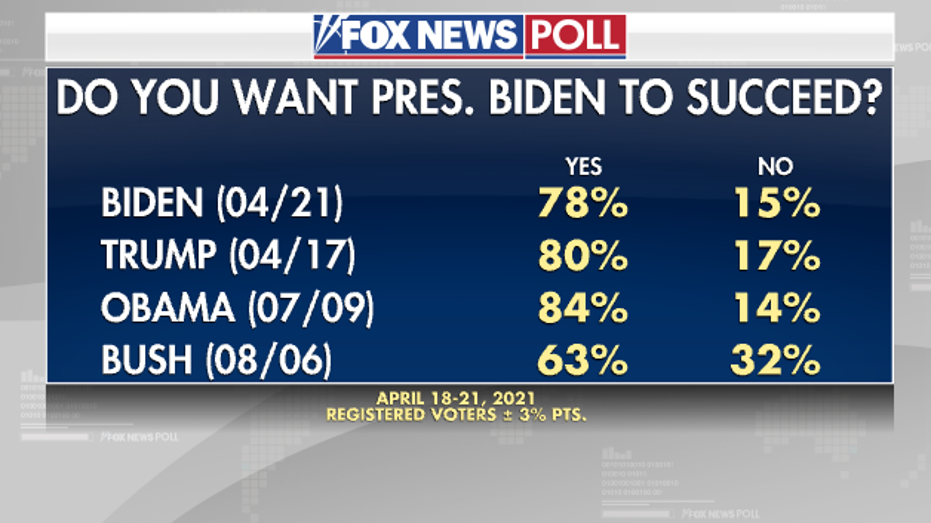 Although lower than former Presidents Trump and Obama, majority of Americans want to see Biden succeed

More voters credit Biden with bipartisanship than GOP lawmakers: 45 percent think the president has "truly made an effort" to work with Republicans in Washington, while 30 percent say Republicans in DC have reciprocated.  That difference is largely due to the fact that 79 percent of Democrats feel Biden has tried to work across the aisle.  Only 43 percent of Republicans feel GOP leaders are doing the same. 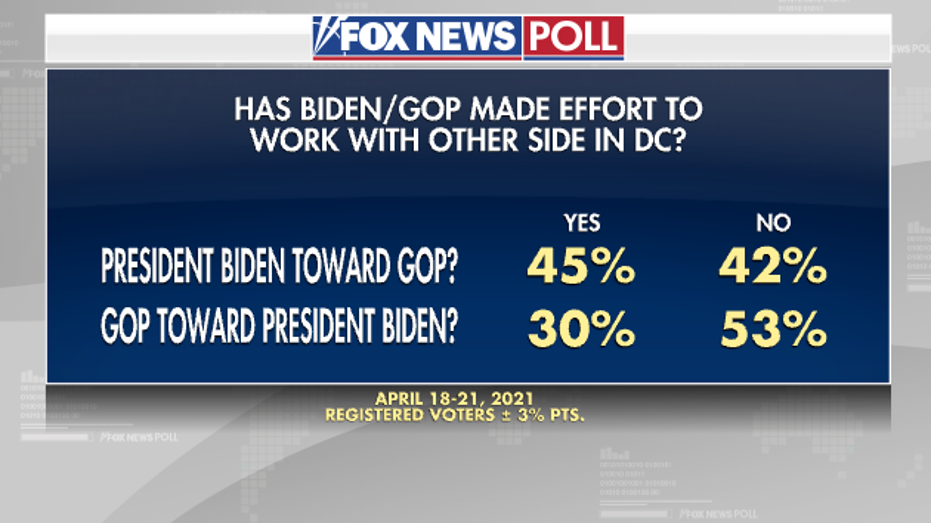 Most want to hear from them more often:  77 percent of voters think it’s important for Biden and Harris to hold regular press conferences.  That includes 87 percent of Democrats, 74 percent of Republicans, and 62 percent of independents.

Conducted April 18-21, 2021 under the joint direction of Beacon Research (D) and Shaw & Company (R), this Fox News Poll includes interviews with 1,002 randomly chosen registered voters nationwide who spoke with live interviewers on both landlines and cellphones. The total sample has a margin of sampling error of plus or minus three percentage points.