He is leaving the State Department with many of its diplomats and staff expressing outrage at his behavior, accusing Mr. Pompeo of failing to acknowledge, much less protest, President Trump’s role in inciting the rioters who laid siege to the Capitol last week. Just weeks before, Mr. Pompeo had suggested that Mr. Trump won an election that he lost.

And now, in Mr. Pompeo’s last week in office, United States allies, who have long bristled at his threats and lectures, are making clear that they believe that he and Mr. Trump presided over the most far-reaching damage in decades to America’s traditional role as a exemplar of democracy.

For Mr. Pompeo, who left his post as C.I.A. director to take on a job whose first occupant was Thomas Jefferson, it is the culmination of a tense relationship with the professionals inside what Mr. Trump once referred to as the “Deep State Department.”

In private conversations, some of the country’s top diplomats have described a wait-him-out strategy at the Harry S. Truman Building, as they tried — mostly unsuccessfully — to slow Mr. Pompeo’s drive to enact major policy shifts in his final days in office. Those have included easing restrictions on Taiwan to spite China, declaring Houthi rebels in Yemen a foreign terrorist organization over the objections of diplomats and humanitarian aid workers, and putting Cuba back on the list of state sponsors of terrorism.

In a few State Department offices, the occupants are keeping discreet electronic countdown clocks, ticking off the minutes until the Trump administration ends.

Mr. Pompeo, for his part, has complained about how often diplomats speak to reporters, even arguing it is inappropriate for them to talk at all — although communicating to a global audience is the role of diplomats around the world. Representatives for the State Department did not respond Monday to requests for comment.

The critiques of Mr. Pompeo’s recent actions have been harshest in the State Department’s famous “dissent” channel, which gives diplomats and civil servants a safe way to express their disagreement with policy — without fear of retribution. So far, there have been two such dissent cables, one signed by over 100 diplomats and civil servants, another by over 170 lawyers who work for the department.

Though different in wording, the dissents criticized Mr. Pompeo’s refusal to separate himself from the president for his efforts to whip up the crowd on Wednesday that ultimately headed to the Capitol.

“Failing to publicly hold the president to account would further damage our democracy and our ability to effectively accomplish our foreign policy goals abroad,” one read.

The other dissent cable, which circulated Thursday and Friday and was signed by more than 100 State Department employees, called for Mr. Trump to be explicitly linked to the violence in public statements issued by the agency.

“Just as we routinely denounce foreign leaders who use violence and intimidation to interfere in peaceful democratic processes and override the will of their voters, the department’s public statements about this episode should also mention President Trump by name,” it said. “It is critical that we communicate to the world that in our system, no one — not even the president — is above the law or immune from public criticism.”

Doing so, the cable concluded, “would allow the beacon of democracy to shine on despite this dark episode. It would also send a strong message to our friends and adversaries that the Department of State applies an ethos of integrity and objective standards when it condemns assaults on democracy at home or abroad.”

One of the dissent cables asked Mr. Pompeo to throw his influence behind an effort to invoke the 25th Amendment to remove Mr. Trump from office. The secretary denounced the violence at the Capitol, but never mentioned Mr. Trump’s role.

Mr. Pompeo focused his complaints last week on Twitter and Facebook for banning Mr. Trump, and at journalists for comparing the effort to manipulate the election results to a “banana republic.”

“The slander reveals a faulty understanding of banana republics and of democracy in America,” Mr. Pompeo wrote.

He also tweeted a photograph of himself, the national security adviser, Robert C. O’Brien, and the director of national intelligence, John Ratcliffe, meeting together. The message appeared to be clear: The three loyalists are not going anywhere until the end of the administration, and have no intention of breaking the bonds with the president.

It was not only Mr. Pompeo’s department raising protests. So did the allies.

The secretary, who is on his way to Belgium on Wednesday for a last foreign trip, canceled a planned stop in Luxembourg after its foreign minister, Jean Asselborn, called Mr. Trump a “criminal” and a “political pyromaniac” in an interview for feeding the rioting at the Capitol.

Even in Brussels, Mr. Pompeo’s trip promises to be awkward, at best.

The State Department said he was traveling “to reaffirm the deep and enduring partnership between the United States and Belgium and the unwavering U.S. support for NATO.”

But what most North Atlantic Treaty Organization allies will remember about the Trump presidency was the president’s episodic threats to pull out of the alliance. Mr. Pompeo will meet Jens Stoltenberg, the NATO secretary general, who on the day of the Capitol siege said on Twitter, “The outcome of this democratic election must be respected.”

Since becoming secretary of state in April 2018, Mr. Pompeo has become Mr. Trump’s most steadfast and outwardly loyal national security official. Until Friday, when he met for the first time with Antony J. Blinken, Mr. Biden’s choice as the next secretary of state, Mr. Pompeo had mostly avoided directly discussing the election results.

At one point, just days after the vote, he cast doubt on the results and predicted “a smooth transition to a second Trump administration.” It was not clear if he was joking.

Mr. Pompeo came late to his alliance with Mr. Trump: In March 2016 he warned that Mr. Trump, then a candidate, would become “an authoritarian president who ignored our Constitution.” But his shift to Mr. Trump was total, a reflection, many believe, of his hopes to inherit the Trump base if Mr. Pompeo, a Californian who moved to Kansas, runs for president in 2024. 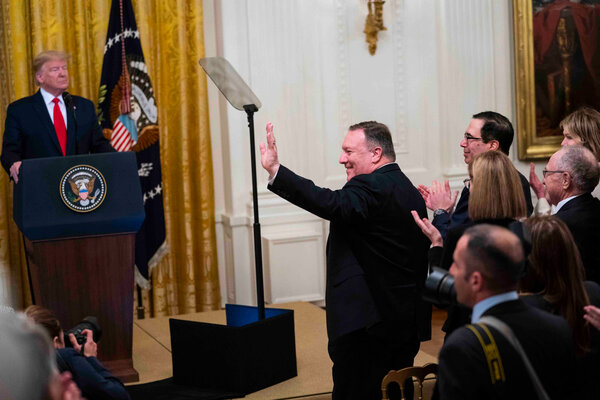 Mr. Pompeo’s allies reject the criticisms from the State Department officials, noting that he called for the prosecution of people who participated in the violent protest. “America is better than what we saw today at a place where I served as a member of Congress and saw firsthand democracy at its best,” Mr. Pompeo said.

But Mr. Pompeo’s unwillingness to acknowledge that Mr. Trump was trying to overturn an election in which there was no evidence of widespread fraud sealed the view about the administration around the world — as one that protests election manipulation everyplace but home.

“Trump inherited a set of relationships, alliances and institutions that, however imperfect, had for 75 years created a context in which great-power conflict had been avoided, democracy expanded, and wealth and living standards increased,” wrote Richard N. Haass, the president of the Council on Foreign Relations and a member of the internationalist wing of the Republican Party that Mr. Pompeo dismissed.

“Embracing a blend of ‘America first’ nationalism, unilateralism and isolationism, Trump did what he could to disrupt many of these relationships and arrangements without putting anything better in their place,” Mr. Haass wrote.

“It will be difficult — if not impossible — to repair this damage anytime soon,” he concluded.

Others think repair is possible.

“Can our soft power recover from these blows?” Joseph Nye, a Harvard professor who served as the head of the National Intelligence Council and as a senior defense official, wrote in recent days. “We have done so before. Our country has serious problems, but it also has a capacity for resilience and reform that has rescued us in the past.”