Home » Is ‘vaccine bounce’ proving a shot in the arm for Boris Johnson amid growing sleaze row?

Is ‘vaccine bounce’ proving a shot in the arm for Boris Johnson amid growing sleaze row?

The drip feed of allegations has been relentless, and the questions seemingly never-ending.

How did Boris Johnson fund his trendy make-over of the Downing Street flat? What messages did he exchange with businessman James Dyson? Just how many times did David Cameron text Rishi Sunak?

But perhaps the biggest question of all – just how much do voters care about the latest sleaze allegations?

If the latest poll is to be believed – not very much.

A YouGov survey for The Times on Friday showed the Conservatives extending their lead over Labour to 11 points, in news that will concern the opposition ahead of next week’s local elections.

Digging down into the figures, it may be that “sleaze” stories are already priced in. Half of people told YouGov they agree the Conservatives are “very sleazy”, with 31% saying they consider Boris Johnson to be less honest than other politicians. If politicians act in a way that voters expect them to, it’s hardly likely to shift the dial on their voting intentions in any significant way.

After next Thursday’s local elections, when every eligible voter in Britain will have their first chance to have their say at the ballot box since the 2019 general election, we’ll get a clearer idea of whether the allegations are cutting through.

But even if there isn’t a discernible impact – or if the Conservatives do well – this is unlikely to be the end of the story.

The allegations have been flickering for a while, but exploded after Dominic Cummings threw a great big bucket of petrol on the flames in a blog post. 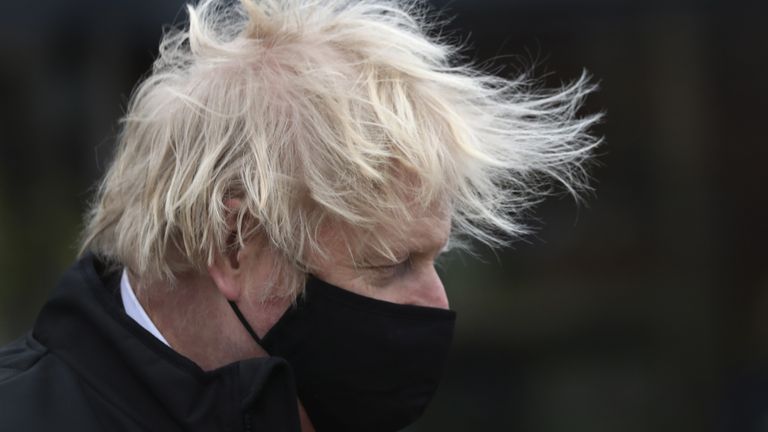 When it comes to the refurbishment of the No 11 flat, Mr Cummings said that the prime minister stopped speaking to him about the matter in 2020 after he told Mr Johnson the plans were “unethical, foolish, possibly illegal and almost certainly broke the rules on proper disclosure of political donations if conducted in the way he intended”.

The relationship between the PM and his former adviser is now entirely broken, and Mr Cummings is clearly prepared to directly criticise his old boss in the most devastating way.

Mr Johnson may be forgiven for exchanging text messages with company bosses like James Dyson, or even funding expensive wallpaper through temporary loans from Conservative party donors.

But voters may be less forgiving when it comes to the prime minister’s handling of COVID-19.

The Conservatives are enjoying a “vaccine bounce” in the polls, as the successful rollout of jabs continues.

Just a few short months ago, in December, Sir Keir Starmer was celebrating a four-point lead in the polls. But, as the vaccination campaign built up speed and hospitalisations and deaths began to fall, the opinion polls changed accordingly – with the government now seeing comfortable double digit leads over the opposition.

Clearly the handling of COVID-19 is, understandably, uppermost in voters’ minds.

Dominic Cummings – a man who has been at the heart of the government’s response to the pandemic – knows this only too well.

In his blogpost, he promised to answer questions about “any” issues when he appears before a parliamentary inquiry into the government’s pandemic response on 26 May.

Mr Cummings is a ruthless campaigner who knows Boris Johnson’s weaknesses. We may have got a taste of that with the Daily Mail front page alleging the prime minister vowed to let the bodies “pile high” rather than impose another lockdown (claims the prime minister denies).

Either way, it’s too premature to know if the damage of the last couple of weeks is likely to stick.