Respected election expert and Tory peer Robert Hayward said it will be “utterly astonishing” if Tees Valley mayor Ben Houchen and fellow Conservative West Midlands mayor Andy Street win re-election. A victory in Teesside is considered a key test for Sir Keir and would give his party hope it can re-take former “red wall” seats won by the Conservatives in 2019 – but a failure to overturn Mr Houchen’s slim majority will trigger a new wave of criticism of his leadership. Tories believe that a string of major announcements intended to boost the economy of the northeast may persuade voters to stick with Mr Houchen.

Lord Hayward described the scale of the challenge of holding onto the two mayoralties won by the party in narrow but iconic victories in 2017, saying: “For me, if the Tories hold either of those it will be utterly astonishing, given they were both elected when the Tories were leading by 18 percent… [The] fact that we can even have the conversation about Ben Houchen winning is just staggering.”

He said that if Labour fails to oust these Conservatives and does not win the Hartlepool by-election, also held on May 6, it will demonstrate that “clearly things are not fine” for the party.

Richard Holden, the Conservative MP for North West Durham, detailed how he hopes Mr Houchen can defy expectations and win a new term as mayor.

He said: “In normal times you expect governing parties to be absolutely hammered in local elections. But the truth is that Teesside is on an absolute knife edge this time and there is a chance that Ben can hang on because he is really starting to deliver those big levelling-up pledges that have been made by the Conservatives over the last few years. 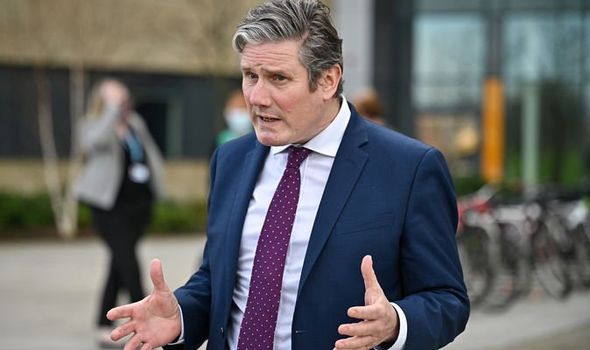 “You’ve got the Treasury moving to Darlington, the free port coming to Teesside with all the jobs that’s clearly bringing, so there’s a real chance that he could buck the trend and just about hold on.”

She said: “During his term of office he has shown leadership and vision. He has brought jobs and inward investment to the area and ensured the north east is a much higher priority for the Government.

“Ben has been a prime example of how Conservatives actually deliver for blue collar voters in contrast to Labour who took those voters for granted for decades.”

The contests will take place on the same day as elections for councillors across England, police and crime commissioners, a string of directly elected mayors in cities including London and Liverpool, and members of the Welsh and Scottish Parliaments.

Lord Hayward said Covid-19 meant there would be “enormous pressures on returning officers” as they sought to ensure people can vote safely.

However, he predicted that the Conservatives – who are widely thought to have enjoyed a popularity boost because of the successful roll-out of the vaccine so far – will benefit if the pandemic remains the number one issue for voters.

He said: “If Covid diminishes in people’s minds then other things will cut through and that may work to Labour, or the Lib Dems or the Greens or whoever’s advantage.”