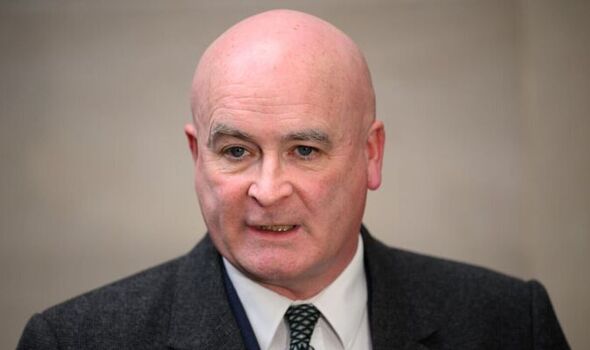 The RMT general secretary is threatening a series of 48 hour walks outs during the festive period that will bring the network to a halt. Mr Lynch said Transport Secretary Mark Harper had agreed to help secure a resolution to the dispute with train bosses. He claimed there was none of the “bellicose nonsense” that had come from Grant Shapps when he held the government brief.

But Mr Lynch said the union was “no closer” to calling off the upcoming strikes.

Mr Harper said the talks had been “constructive” and there is a deal to be done.

“We have common ground – we both want the dispute to end and we both want a thriving railway which delivers for passengers and workers alike,” the Cabinet minister said.

“To achieve this though, we need to work together, across the entire industry to ensure our railway industry thrives.

“There is a deal to be done, and I believe we will get there – I want to facilitate the RMT and the employers to reach an agreement and end the dispute for the benefit of the travelling public.”

Mr Harper said it is up to the unions and employers to address their long-running dispute over pay, jobs and conditions, urging both parties to “hammer out” reforms to deliver a better service.

But Mr Lynch has insisted the Cabinet minister has a “direct say” over what the companies in question can offer his members.

“We’re now starting to get a dialogue,” he said. “What we’re chiefly asking him to do – you’ve heard him say that he’s going to be a facilitator towards a settlement or a resolution of the dispute,” he said.

“We’ve said to him that there’s no good having these warm words, we’ve heard them from his predecessor, Anne-Marie Trevelyan, but nothing actually happened. So, we want him to set down in writing what he’s going to do about the mechanics of how a resolution will be facilitated.”

It comes as picket lines were mounted outside schools, universities and Royal Mail centres yesterday.

Union leaders claimed the walkouts were being solidly supported by the public.

The general secretary of the Communication Workers Union (CWU) accused Royal Mail of subjecting its workers to a “psychological attack” over their working conditions.

Members are pressing ahead with a series of strikes in the coming weeks, including on Friday and on Christmas Eve.

Around 70,000 members of the University and College Union (UCU) walked out in a dispute over pay, pensions and contracts.

Schoolchildren stayed at home as teachers across Scotland walked out in their first national pay strike in almost 40 years.