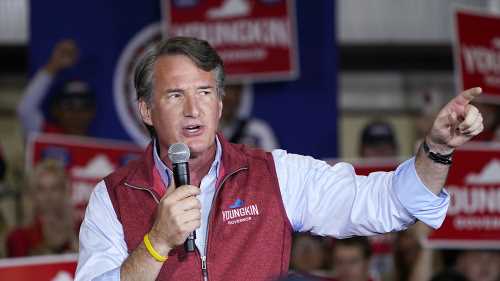 Polls closed in the state on Tuesday night. As the current results stand, Youngkin has drawn 50.9% of the vote with over 95% of polling stations reporting. McAuliffe has drawn 48.4% of the vote.

The race will be widely interpreted as one of the first gauges of support for the country’s two major political parties after last fall’s election of President Joe Biden. The gubernatorial vote is also seen as a bellwether for Democratic strength ahead of next year’s midterm elections, in which the party will defend thin majorities in both houses of Congress.

McAuliffe, who served as Virginia’s governor from 2014 to 2018, aimed to return to the office. State laws prevent incumbent governors from seeking consecutive terms. McAuliffe is close to both former President Bill Clinton and former Secretary of State Hillary Clinton, having served as a leading fundraiser for both for decades.

Youngkin is new to politics. The 54-year-old is coming off of a 25-year tenure at the global investment firm Carlyle Group. His campaign has exceeded expectations, toppling a Democratic winning streak in Virginia statewide races that began in 2012.

The two candidates continued to poll evenly in the weeks leading up to the vote. Youngkin and McAuliffe clashed over matters ranging from Virginia’s economy to COVID-19 to education.

Both the McAuliffe and Youngkin campaigns frequently attacked one another for their ties to President Biden and former President Donald J. Trump, respectively. Though Biden won Virginia in last fall’s presidential election, the state’s population is currently split in their opinion of his job performance, with only 48% approving.

While Trump endorsed Youngkin, the candidate has distanced himself from the former President throughout the race. For this reason, Youngkin’s victory is also seen as an indication of the GOP’s ability to unite both pro- and anti-Trump factions in the party.