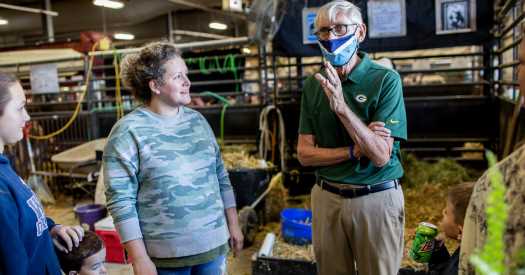 Now, the 2022 races for governor in Michigan, Wisconsin and Pennsylvania — states that have long been vital to Democratic presidential victories, including Joseph R. Biden Jr.’s — are taking on major new significance.

At stake are how easy it is to vote, who controls the electoral system and, some Democrats worry, whether the results of federal, state and local elections will be accepted no matter which party wins.

That has left Govs. Tony Evers of Wisconsin, Gretchen Whitmer of Michigan and Tom Wolf of Pennsylvania standing alone, in what is already expected to be a difficult year for their party, as what Democrats view as a sea wall against a rising Republican tide of voting restrictions and far-reaching election laws.

The question of who wins their seats in 2022 — Mr. Evers and Ms. Whitmer are running for re-election, while Mr. Wolf is term-limited — has become newly urgent in recent weeks as Republicans in all three states, spurred on by former President Donald J. Trump, make clearer than ever their intent to reshape elections should they take unified control.

Republicans have aggressively pursued partisan reviews of the 2020 election in each state. In Pennsylvania, G.O.P. lawmakers sought the personal information of every voter in the state last month. In Wisconsin, a conservative former State Supreme Court justice, who is investigating the 2020 election results on behalf of the State Assembly, issued subpoenas on Friday for voting-related documents from election officials. And in Michigan on Sunday night, Ms. Whitmer vetoed four election bills that she said “would have perpetuated the ‘big lie’ or made it harder for Michiganders to vote.”

Republican candidates for governor in the three states have proposed additional cutbacks to voting access and measures that would give G.O.P. officials more power over how elections are run. And the party is pushing such efforts wherever it has the power to do so. This year, 19 Republican-controlled states have passed 33 laws restricting voting, one of the greatest contractions of access to the ballot since the Voting Rights Act was passed in 1965. Democrats in Congress have tried without success to pass federal voting laws to counteract the Republican push.

The prospect that Mr. Trump may run again in 2024 only compounds what Democrats fear: that Republicans could gain full control over the three key Northern states in 2022 and, two years later, interfere with or overturn the outcome of a narrow Democratic presidential victory in 2024.

“I would’ve never guessed that my job as governor when I ran a couple years ago was going to be mainly about making sure that our democracy is still intact in this state,” said Mr. Evers, a former Wisconsin schools superintendent. He was elected governor in the Democratic wave of 2018 on a platform of increasing education spending and expanding Medicaid.

He and Ms. Whitmer are seeking re-election while vying to preserve the voting system, which was not built to withstand a sustained partisan assault, in the face of intensifying Republican challenges to the routine administration of elections. Mr. Wolf cannot seek a third term, but his Democratic heir apparent, Josh Shapiro, the Pennsylvania attorney general, has been on the forefront of legal efforts to defend the 2020 election results for nearly a year.

The shift from focusing on traditional Democratic issues like health care and education to assuring fair elections is starkest for Mr. Evers, a man so aggressively staid that he’s partial to vanilla ice cream.

Last week, as he walked through a row of black-and-white Holstein cows at the World Dairy Expo, he predicted that if he were defeated next year, Republican legislators would have a direct path to reverse the results of the 2024 election.

“The stakes are damn high,” Mr. Evers said above the din of mooing and milking at Madison’s annual dairy trade show. “This is about our democracy. It’s frightening.”

The message that democracy itself is on the line is a potentially powerful campaign pitch for Mr. Evers and his fellow Democrats, one he has used in fund-raising appeals.

Republicans dismiss the idea that they are undermining democracy and say that their various election reviews will increase, not decrease, voters’ trust in the system.

“It’s full of hyperbole and exaggeration, which is what the Democrats do best on this election stuff,” Robin Vos, the speaker of the Wisconsin State Assembly, said in an interview last week at the State Capitol. “All we’re trying to do is make sure that people who were elected were elected legitimately.”

Mr. Vos said he was still not sure if President Biden had legitimately won the state. (Mr. Biden carried it by more than 20,000 votes.)

It would not take much to swing statewide elections in Michigan, Wisconsin and Pennsylvania. Four of the last six presidential contests in Wisconsin have been decided by fewer than 23,000 votes. Other than Barack Obama, no presidential nominee has won more than 51 percent of the vote in any of the three states since 1996.

And as Mr. Trump and his allies chisel away at confidence in American elections by making baseless allegations of voter fraud, it is no longer a stretch to imagine governors loyal to the former president taking previously unthinkable steps to alter future results.

Governors are required to submit to Congress a certificate of ascertainment of presidential electors. But what if a governor refused?

Another scenario could also give a governor outsize power over the presidential election: A state could send competing slates of electors to Congress, and the House might accept one slate and the Senate the other. Then, the Electoral Count Act of 1887 — the guidelines for tallying Electoral College votes, which remained obscure until the violence of Jan. 6 — appears to give the state’s governor the tiebreaking vote.

The National Task Force on Election Crises, a nonpartisan group of experts in various fields, warned about such a possibility in a September 2020 memo.

“It wouldn’t be an overstatement to say that any one of those states falling to a Trump-aligned candidate would pose an existential threat to the survival of American democracy come the 2024 election,” said Ian Bassin, the executive director of Protect Democracy, a nonpartisan group dedicated to resisting authoritarianism, who convened the election crises task force before the 2020 election.

Republicans have not been shy about their ambitions to change election laws in the three states.

In Pennsylvania, Lou Barletta, a former congressman who recently announced a bid for governor, said that as he crossed the state last week, the top issue for voters was “election integrity.”

“People talk to me about mandates, about vaccines, but they always bring up election integrity as well,” Mr. Barletta said in an interview.

He said that he was waiting for the Republicans’ election review before committing to a full slate of election changes, but that he already had a few in mind, including stricter voter identification laws.

James Craig, the leading Republican candidate for governor in Michigan, has backed bills that would forbid the mass mailing of absentee ballot applications to voters who do not request them and that would enact a strict voter ID requirement. He declined to comment.

Those proposed laws are being pushed by Ed McBroom, a Republican state senator, even though he released a report in June debunking Trump-inspired claims of election fraud.

“Somebody could pretty easily try to impersonate somebody they don’t know,” said Mr. McBroom, who leads the Michigan Senate’s elections committee.

And in Wisconsin, Rebecca Kleefisch, a Republican who served as lieutenant governor under Gov. Scott Walker until 2019, is challenging Mr. Evers with a campaign platform that calls for shifting responsibility for the state’s elections from the bipartisan Wisconsin Elections Commission, which her and Mr. Walker’s administration created in 2016, to the G.O.P.-controlled Legislature. Ms. Kleefisch declined to comment.

Perhaps no 2022 Democratic candidate for governor is as familiar with Republican attempts to dispute the 2020 outcome as Mr. Shapiro. As Pennsylvania’s attorney general, he defended the state in 43 lawsuits brought by Mr. Trump and his allies that challenged voting methods and the results.

“There are new threats every single day on the right to vote, new efforts to disenfranchise voters, and I expect that this will be another huge test in 2022,” said Mr. Shapiro, who is planning to announce a campaign for governor as soon as this month.

Last month, Mr. Shapiro filed a lawsuit to block Republicans in the Pennsylvania Senate after they sought the personal information of all seven million voters in the state as part of their election review, including driver’s license numbers and partial Social Security numbers.

In Michigan, Ms. Whitmer, who has faced threats of an insurrection in her statehouse and a kidnapping plot, is now fighting a Republican attempt to work around her expected veto of a host of proposed voting restrictions.

“The only thing that is preventing the rollback of voting rights in Michigan right now is the threat of my veto,” she said in an interview.

Michigan was also home to one of the most forceful and arcane attempts at reversing the outcome in 2020, when Republican election officials, at Mr. Trump’s behest, tried to refuse to certify the results in Wayne County and stall the certification of the state’s overall results. That memory, combined with new voting bills and Republican attempts to review the state’s election results, makes Michigan’s election next year all the more important, Ms. Whitmer said.

“If they make it harder or impossible for droves of people not to be able to participate in the election,” she said, “that doesn’t just impact Michigan elections, but elections for federal offices as well, like the U.S. Senate and certainly the White House.”

Mr. Vos said he had not thought about the degree to which Wisconsin Republicans could change voting laws if the state had a Republican governor. But this year, the State Legislature passed a package of six bills that would have enacted a range of new voting restrictions.

Mr. Evers vetoed them all.

“I’ve learned to play goalie in this job,” he said. “And I’ll continue to do that.”