Home » Business » Airbnb CEO: Workplace flexibility is the future but there are risks

Airbnb CEO: Workplace flexibility is the future but there are risks

New York (CNN Business)Airbnb has been on a wild ride. Many had doubted it could survive as Covid cases soared and the company lost 80% of its business. But now things are turning around for the vacation home rental business, with users booking longer stays thanks to greater flexibility in the way we live, work and travel.

Co-founder and CEO Brian Chesky spoke with CNN’s Erin Burnett about the business, his vision for the future of work, and the company’s promise to offer temporary housing for 20,000 Afghan refugees.
Burnett: Your words here are ‘travel revolution’ and that you think the industry will come back bigger than ever. Some people look at this and they say, ‘Wait, things have fundamentally changed and business travel has changed and the way people view travel has changed.’ What are you seeing that makes you so optimistic?

Chesky: Well they’re right. Everything has changed. The world is never going back to the way it was in 2019. Before the pandemic, we used to live in one place or house, work in another place or office, go to a third place — travel. Now, all three places are in the same place. And they can be anywhere we want to be. And so long as employers allow people to live a hybrid life — we don’t all have to come back to work five days a week. What it means is millions of people are now more flexible. They’re more flexible about where they can go, when they can go. And so this is, I think, going to open up a huge amount of flexibility, and therefore a lot more travel for people.

Burnett: Ok, so this travel then, some of it’s related to… longer stays or longer weekends.

Chesky: Absolutely. So I’ll give you an example. Half of our nights booked are now a week or longer. Half of our business is now a week or longer. This is way outside what was typically considered a typical travel trip, which is just a few nights.
A fifth of our business, by nights, is longer than a month. That’s not even travel. This would have never been possible because you had to be back in the office.
Burnett: Right… you had to generally plan around a one-week vacation, which by the time you get there and you settle in and you leave, right, it’s a few days.
Chesky: Exactly. And you don’t have to believe that the world is going to stay like this forever. All you have to believe is that everyone is not going to go back to the office five days a week to believe that everything has changed at least somewhat, and that’s what we’re seeing.
Burnett: Ok, so now let me talk about this, because this is what it’s about: It’s about work as well. It’s interesting how you talk about work, travel, home, all in the same place.
Chesky: They’re totally related.
Burnett: But what about you? So Airbnb, the last I checked, you’re not requiring people to come back until a year from now. And even then, you’ve described the lifestyle as ‘live anywhere.’
Chesky: Yeah.
Burnett: Ok, so that’s very different than what we hear from some other companies. The CEO of Morgan Stanley has now famously said, if you can go to a restaurant, you can come back in the office. So if I see you there, I better see you here. You feel differently. Tell me why.
Chesky: Well I don’t think CEOs are going to dictate how people work in the future. I think employees will. Because if a CEO says you have to go back to the office, they’re going to have a choice: Do I want all the talent pool, or just the people willing to come in to my office?
I think ultimately, we as leaders are going to need to compete for the best talent. And after compensation, the next most important benefit will probably be flexibility. And so I do think that ultimately employees are going to drive the future, not employers.
Burnett: Which is fascinating. And when you think about this and you look out, I know that this is permanent in your mind about how you’re going to allow people to work.
Chesky: Yeah, absolutely.
Burnett: But there is this whole, well, I want to see [my employees] sometimes.
Chesky: Me too. I don’t think anyone who is predicting they’re going to make their employees go back five days a week, or anyone who is saying they’re 100% remote — both those positions are probably going to converge toward somewhere in the middle.
So we’re going to want to see employees occasionally, and we’re going to have to figure out how frequently that is. But you know, you can save money on real estate. You can also hire a much more diverse talent pool. We’re based in San Francisco — San Francisco does not represent all of the talent in the world — especially around the country. So I think there’s a huge opportunity here. 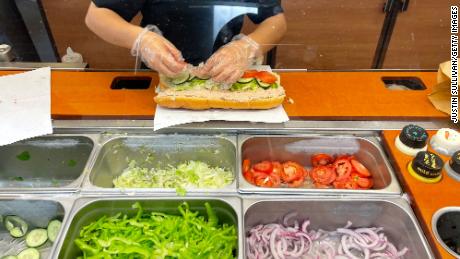 Now, there are risks. The risk of remote is it can also be very isolating. It can be very lonely. So I do think that one of the risks is that a lot of physical communities are going away. Physical offices, not as many people going to restaurants, not as many people going to churches, malls. So we’re going to need to design ways for people to connect. And I think one of things we’re trying to do with our business is inspire more… off sites, family gatherings, ways for people to connect.
Burnett: Right. So larger groups. So now it becomes a business thing — you do an offsite for a group or something like that.
Chesky: Absolutely.
Burnett: So in terms of your business, [the pandemic] was an existential threat when it first happened. Now it’s like ‘I look back, and I think ok, Airbnb became a great place to go because I wanted to go somewhere and couldn’t go far.’ But, at first, it was ‘Airbnb is done.’
Chesky: There were articles — Will Airbnb exist? Is this the end of Airbnb? Can Brian Chesky save Airbnb?. These were all headlines. And this was crazy because only eight weeks earlier, we were preparing for an IPO.
We were a high-flying tech startup. And then eight weeks later, we lose 80% of our business. That’s like a Mack truck going 80 miles an hour and then slamming on the breaks — usually nothing good happens. We had to rebuild our company from the ground up. And by the way, we did the entire thing on Zoom. We went public on Zoom.
Burnett: [You went] public on Zoom. Hired 1,000 people on Zoom.
Chesky: Hired 1,000 people on Zoom. And we’re more productive than we’ve ever been. Again, I don’t think we should all just live remotely 100% of the time. But we should acknowledge this is part of the future.
Burnett: So let me ask you about one other thing, and that is the temporary housing for Afghan refugees. And I noticed when you announced that, you said free, temporary housing for 20,000. And it was coming through your foundation, it was coming from you personally, but it was also coming from hosts who were willing to do it. So where are you right now? How many of these refugees have found Airbnb homes?

Chesky: So we have probably around 700 or so people that we found housing for, but we would like to provide housing for 20,000. And it seems like there’s going to be a lot more than 20,000 refugees.
So we’re working as hard as we can to get as many hosts as possible to open their homes all over the country. We started these efforts about 10 years ago, actually initially with people that were temporarily displaced because of disasters like Hurricane Sandy. Eventually we started housing refugees. And so if anyone is really interested in providing housing for a refugee, you can go to Airbnb.org. We provide all of the tools. And you can choose to open your place for free, but if you want to get paid, we will still reimburse you.
Source: Read Full Article